Orokin/Quotes
The highly revered Orokin civilization built sovereignty on a culture of art, technology and architecture. To prove oneself worthy of elevated social status, one must face Orokin trials in the golden and majestic Halls of Ascension. At one time a utopian society of omniscient leadership, the great Orokin Era ended in a divine realization of their own ignorance.
—Orokin Fragment

The Orokin was an ancient civilization that ruled over the Origin System in the distant past. During what was known as the Orokin Era, they built technological masterpieces that surpass even present day technology while exercising complete dominion over the known world. Although details about the Orokin are scarce, they are almost entirely responsible for the current state of the Origin System.

Details about Orokin culture are scarce, but it is evident from their architecture and relics that they were obsessed with splendor, luxury, beauty, and excess.[1][2][3] The Orokin favored white, gold, black, and blue in their aesthetics, and tended to construct massive structures adorned with innumerable golden ornaments complemented by long hallways and extremely high ceilings.[4][5] Orokin-made items all share this luxurious design, from tea sets and clothing to even their most basic infantry rifles, and their distinctive relics have continued to influence cultures all the way up to the present day. Some high-ranking Orokin even modified their own bodies to obtain a more aesthetically wild and beautiful appearance than would ever be naturally possible, with blue skin and an elongated right arm.

Despite their futuristic splendor, much of Orokin culture was heavily influenced by ancient cultures, with much emphasis placed on honor, propriety, loyalty to one's superiors, and acceptance of the status quo. Being dominated by an immortal aristocracy with access to highly advanced technology, Orokin culture was also extremely conservative and repressive. Class mobility and ascending beyond one's station were exclusive privileges offered to very few, while most people were expected to offer unquestioned servitude to their quasi-divine masters. Economic practices under doctrines such as capitalism were viewed with suspicion for their potential to raise individuals beyond the class of their birth[6]. Social repression took many forms, from restricting access to technology and resources (to the point where serfdom and back-breaking manual labor were common in agriculture despite the option of industrialization), forcible genetic manipulation (as was done to create the Grineer slaves) to the outright seizure of children from their homes to be sold off in Yuvan markets[7]. Punishments for even the smallest transgressions were brutal, often collective, and ranged from mutilation (such as hands being cut off as punishment for theft[8]) to execution via the Jade Light (which incinerated people entirely) to conversion of the condemned into Cephalons as a means of perpetual servitude[9]. Notably, Orokin society rejected automation via robotics despite being evidently capable of it: while advanced robotics were commonplace for minor, menial tasks such as environmental surveillance, the creation of true machine intelligence was generally forbidden [10] and only employed in the direst circumstances. Manual labor from slaves and serfs was always preferred.

Orokin society was highly stratified, with only those at the very top being regarded as actual Orokin. From what we know, the empire was led by multiple Emperors[11] whose names and details are unknown.[12] The Orokin's judicial body was a council known as The Seven.[13] It is implied that these seven were of Executor rank and included Ballas,[14][15] though there was a Congress of Executors beyond that.[16] Classes beneath them include Archimedeans (scientists and scholars), Lorists (healers)[17], Sectarus (navigators or ship operators)[18] and Enginus (an unknown role)[18]. It is unclear to what extent these were regarded as Orokin rather than servants or underlings of the Orokin. In addition, the Orokin constructed a caste of genetically engineered slaves to serve their most basic industrial and military needs, while the rest of the empire was made up of less wealthy and advanced populations performing technological and economic services which would eventually congeal into the Corpus, following the teachings of Parvos Granum. A small conclave of warriors known as the Dax served as the Orokin's most elite soldiers. The Dax were enhanced with technology to be more lethal and agile in combat, while also made mentally unable to disobey their masters.

Culturally, the Orokin held seven virtues to be of utmost importance, collectively known as The Seven Principles.[19] These principles were speed, power, cunning, agility, endurance, cooperation, and stealth.[20] There are indications that, in an older era of the Orokin civilization, Dualism[21] was a central concept in their culture as well. In addition, the Orokin practiced many ancient pastimes, such as the playing of Komi, Lunaro, the musical instrument known as a Shawzin, and celebrating Naberus, a holiday that celebrates their achieved immortality.[22]

The Orokin represented and continue to represent the height of technological achievement in the Origin System. Of particular note is their mastery of biological engineering, allowing them to modify their own bodies, construct armies of cloned slave labor, invent a living weapon that proved to be nigh-uncontrollable, produce terraforming drones that could adapt to any obstacle they encountered, convert invaders into unwavering allies, and create almost indestructible humanoid warriors for the Tenno to command. On a larger scale, the Orokin constructed massive Solar Rails enabling fast interplanetary and even interstellar travel, terraformed some of the most inhospitable planets in the system, and learned how to navigate the alien dimension known as the Void.

Orokin obsession with luxury and domination often combined with their unparalleled technology to form highly disturbing results. The Orokin ruined much of the Origin System in their search for resources to feed their addiction to excess, which was ultimately the cause for the Sentients' war against them.[23] Of particular note is the ritual known as Continuity, which the Orokin would use to obtain effective immortality.[24] The ritual allows an individual to transfer their consciousness to another's body by filling them with torment and despair until the host is nothing more than an empty husk. This is likely the process through which the Grineer Queens survived as long as they did, although they were eventually forced to practice the ritual upon defective Grineer bodies. 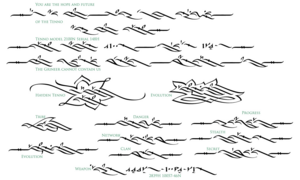 The Orokin Language is largely based upon English but with a coarser, often more phonetic spelling. The characters are diagonally slanted and are usually written left to right when on flat surfaces. Vowels take the form of polarity symbols written above the regular characters. The direction of writing frequently varies when it is found on both the left and right of an object, presumably because it was copied and flipped from one side to the other.

Although there are no live excerpts of the Orokin Language to demonstrate how it is spoken, the Lotus, Ordis, Tenno and the Red Veil presumably understand and can speak Orokin as their local language. However, given that the Stalker was also once part of the Orokin Empire and presumably spoke their language, it can safely be assumed that it is spoken in a hissing, sibilant fashion.

A particular system of words was used and possibly created by Albrecht Entrati: the Requiem words, each of them has its own meaning and seems to have mysterious ties to the Void itself.