The Opticor Vandal is the Vandal variant of the

This weapon is awarded for earning 100 points from the recurring Thermia Fractures event that was first introduced in Operation: Buried Debts, complete with a free weapon slot and a pre-installed Orokin Catalyst. 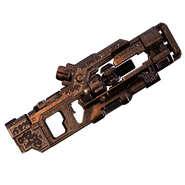 Retrieved from "https://warframe.fandom.com/wiki/Opticor_Vandal?oldid=2120687"
Community content is available under CC-BY-SA unless otherwise noted.