“It is done. Operation: Tubemen of Regor is no more.”
This event has concluded on all platforms.

For the gamemode introduced with this event, see Sealab Sabotage.

These intercepted transmissions promise the opportunity to strike at the heart of Tyl Regor's secret cloning labs but this opportunity comes with a difficult choice.

Alad V thinks these labs contain a cure for the Infestation that riddles his body and he wants us to find it. Nef Anyo hates Alad and will do anything to keep him from becoming strong again, including destroying the cure he seeks. Both are offering to lead us to the labs.

You must decide which is the lesser of two evils.

The Lotus intercepted information on Grineer scientist Tyl Regor's secret cloning labs in the depths of Uranus. Deciding it was the perfect opportunity to weaken the Grineer Empire, who were already struggling to revert the effects of their Cloning Decay Syndrome, the Lotus instructs the Tenno to go to the Grineer Sealabs, allowing them to choose whether to destroy Regor's research or to steal it.

Alad V, a shadow of his former self, begs the Tenno to find a cure within those labs, in hopes to cure himself of the Infestation he was exposed to during his prior research. In response, Corpus plutocrat Nef Anyo offers to pay the Tenno to destroy the cure in spite of Alad V's traitorous actions to the Corpus.

Regardless of who the Tenno sided with, Alad V eventually finds a cure, becoming one of the few survivors of the Infestation.

Your next steps will be determined by the side you have chosen:

As well as the above rewards, Battle Pay will also be awarded at the completion of a regional battle. The following are the known offered Battle Pay for the event:

Q: Are there leaderboards or trophies?
A: There are not.

Q: What other rewards are there?
A: Stay tuned for lots of battle pay! 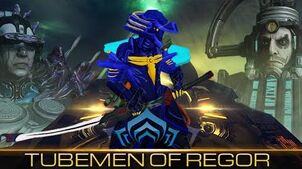 Tubemen of Regor - Who should you side with? 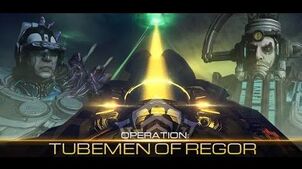