“It is done. Operation: Buried Debts is no more.”
This event has concluded on all platforms. 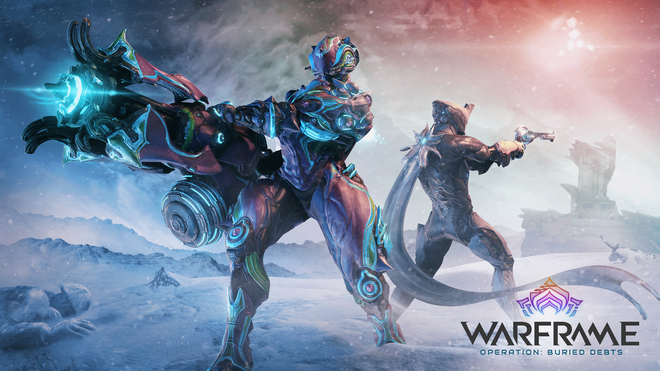 Deep in the bitter heart of the Orb Vallis lies a hidden mystery.

Thermia fractures are cracking open the surface of Venus, a consequence of Nef Anyo’s unrelenting greed. He’s willing to do whatever it takes for a quick profit, including putting the whole Orb Vallis at risk. Over the next several weeks, work alongside the community and Solaris United to locate, uncover, and solve a multi-part Operation and the mystery lurking below the surface.

Operation: Buried Debts is an event released with Update 24.4 (2019-03-08) that uncovers a place long forgotten by Solaris United, ultimately leading to the battle with the Exploiter Orb. It consists of two parts: First, uncovering a piece of hidden past of the Orb Vallis (unique to the Operation) and second, an ongoing effort of closing the Thermia Fractures all over the Vallis (a bi-weekly recurring event).

“You're not supposed to be in here! You're going to ruin the surprise!”
The following article/section contains spoilers.
Data-Hashes Spoilers ▾▾

As the player scans for data-hashes, Eudico asks Rude Zuud to look into them. Zuud refuses and tries to excuse herself until Chatter's insists.

Zuud explains that the data-hashes are glyphs that contain a passphrase. However, as the player continues to search, Zuud becomes increasingly disturbed, citing "we can never go home."

After finding all 16 data-hashes, Eudico realizes what the passphrase opens, a place she never thought she'd return to. She tells the Tenno to head to a cave northeast of Harindi Crater. The cave contains a gate with a 16-cipher lock. Chatter insists they open the gate but Zuud fears what lies beyond, mentioning unpayable debts. Opening the gate requires no player input as the passphrase has already been automatically inputted into the terminal, reading "THE DEAD HAVE DEBTS" in the Corpus Language.

The gate houses none other than the ruins of Deck 12, the site of the infamous incident that initially destroyed Solaris United and left its survivors, Zuud especially, traumatized.

Deck 12 is unlocked - if you know where to look. Work with Solaris United to take down The Exploiter while the operation is still active! Every Diluted Thermia resource you’ve harvested will allow you an encounter with The Exploiter, you can stockpile and share.

The Exploiter has the ability to summon a powerful blizzard around itself, whipping up winds that can freeze you solid if you’re not careful. You must find a way to weaken the Orb Mother’s chilling abilities, pick apart its defenses, and ultimately settle the score. 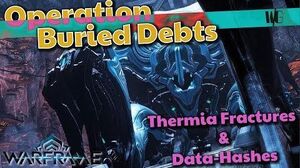 Warframe - THERMIA FRACTURES AND ALL THE PRIZES Operation Buried Debts

Players who can handle an increased challenge are now able to opt-in to making their Thermia Fracture's more difficult! We have added a method to allow players to increase difficulty and lower the overall duration needed to complete 4 Fractures.

Fracture Burps happen on a random timer (5-15 seconds) and randomly selected from the list below:

Your global Data Hash scanning has not gone unnoticed, Tenno. As a Community, you’re close to cracking the code, but not close enough, and that’s our fault. Our predicted end goal was determined to be unreachable in a reasonable amount of time, so we’ve made some manual data tweaks to allow Scans to progress the Operation at a quicker rate to get everyone closer to the next climactic stage. We’ll be mindful moving forward of these end goals for similar Operations. See here for updated Data Hash information:﻿ https://forums.warframe.com/topic/1070712-corpus-data-hash-sabotage/

Once the code has been cracked in-game, more information will become available.