“It is done. Operation: Breeding Grounds is no more.”
This event has concluded on all platforms.

For the gamemode introduced with this event, see Hive Sabotage.

Alad V has developed a way to direct the spread of the Infestation. Using these newly engineered "hive" organisms, the Infestation is able to corrupt a new ship or colony almost instantly. There are also disturbing reports coming in that the virus has evolved. It is now capable of absorbing and corrupting non-organic beings. Not even the robotic soldiers of the Corpus are safe now. The only way to stop the spread is to destroy these hives.

We have just received word of a massive outbreak near Eris. An entire fleet of Corpus ships has been exposed to this new bioplague. Alad V is almost certainly responsible. If Alad V's hives are allowed to gain a strategic foothold here, the Infested will become unstoppable. They will overrun the system in a matter of days. If we don’t put an end to this now, the Corpus, the Grineer, the Tenno...we could all fall in the wake of this horrible scourge. 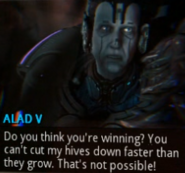 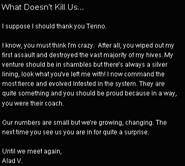 Operation Breeding Grounds is a Hive Sabotage event which follows up the Suspicious Shipments alerts, where the remaining ships of Alad V's fleet have entered the space around Eris.

It requires players to sabotage the Infested Ship by destroying 3 Infested Hives per ship, with each destroyed hive having various consequences for its destruction, such as increased Infested retaliation.

Unlike the original Sabotage mission, existing enemies in this mission are not designed to be exterminated (will respawn) and will continue to assault the player until extraction.

With the Zanuka Project slowing to a halt, Alad V decided to look into the Infestation for answers to his disappointing portfolio. His studies resulted in a new development of the Infestation, the Mutalist strain, having the ability to infect inorganic beings such as the robotic MOA. To transmit his creation throughout the Origin System, he engineered Infested Hives, tumors that are capable of corrupting ships and colonies in a matter of seconds.

The Lotus learns of a massive Infested outbreak off Eris and sends the Tenno to destroy the Infested Hives, fearing a system-wide outbreak. Despite temporarily hindering Alad's plans, he mocks the Tenno's futile efforts on stopping the inevitable: the domination of his Mutalist empire.

How do points work?[]

The difficulty of the mission is increased in the following way: All Tenno will begin playing ‘Difficulty 1’ missions with ‘Difficulty 1’ hives! But, this difficulty won’t stay at ‘1’ forever. The Infested can smell the carnage of your missions and will become more and more difficult and aggressive the more Breeding Ground missions you complete. It will take several runs for the stink of the Infested to stick to you. By completing more missions, you will encounter more difficult hives and more difficult enemies! These difficulty increases will allow you to yield higher points in a single run, with endless potential if you want to compete in Clan Leaderboards.

Note, grouping together with other Tenno will have an effect on difficulty depending on the level of combined stench!

Operation Breeding Grounds includes point structure that allows for rewards based on your Best Score, which is the points you earn per mission, not the Total Score.

The top 3 Clans per Clan Tier will receive Gold, Silver, and Bronze “Breeding Grounds” Trophies, with a Clan’s score being the sum of the Best Score run for all members. 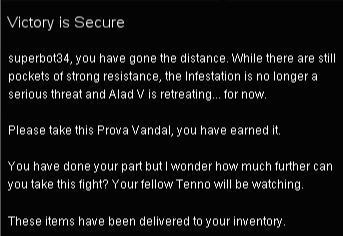