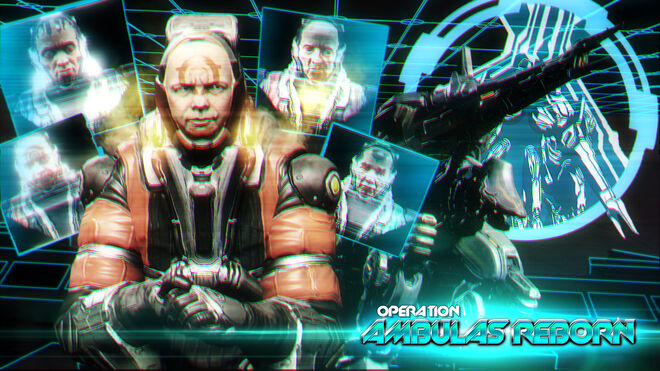 "Actualise... synergy... SYNERGISE. Growth... profit... GROFIT?! Fellow profiteers, this is a once-in-a-lifetime strategic investment opportunity. A game-changer in robotic combat solutions. We're taking big data from our Animo Project and doing a full-stack integration into our most lethal combat proxies. This is: AMBULAS, REBORN!"

Operation: Ambulas Reborn is an event released with Update 20.4. During the event, the Tenno must defeat new Ambulas combat MOA prototypes in normal outdoor Corpus missions in order to gain access to the Ambulas manufacturing facility on Hades, Pluto.

Perrin Sequence leader Ergo Glast has intercepted disturbing communication from the profit-hungry Corpus, they are attempting to grow their military to dangerous and uncontrollable levels. Corpus Board Chairman Frohd Bek is inviting investors to witness the newest and deadliest Ambulas Prototype equipped with state-of-the-art processors called Animo. These investments will push the Ambulas Reborn project into full production.

For Frohd Bek, credits talk, and it’s apparent that he is deploying new Corpus technology to battles as product demos to display their lethality to his investors. Sightings have been confirmed on any Corpus planet region — this technology is not suitable for ship environments, look to terrain and open-air locations to engage.

Work with Ergo Glast and fellow Tenno to halt Frohd’s project and disrupt the Ambulas deployment before they see widespread use.

What you need to do[edit | edit source]

First thing's first: you need to encounter the Ambulas Reborn Prototypes head on. Frohd Bek is deploying them on new Condor Dropships. These deployments *only occur* on Corpus open-air surfaces - not ships!

Take down Ambulas in your encounters and ensure you Hack the target — this will release Animo Beacons which can be used to home in on the Ambulas facility.

Once you have collected enough Animo Beacons, you can head to the Ambulas Plant on Hades, Pluto for a final battle. Taking down Ambulas at the source will earn you a

Supra Vandal and the peace of mind that you've helped put a stop to Ambulas's production.

But these ANIMO BEACONS have other use...

What you need to know[edit | edit source]

You can collect Animo Beacons from Ambulas encounters based on the level of the Ambulas defeated:

To encounter the final Boss Fight on Hades, you will need to earn a certain amount of Animo Beacons depending on if you are a Solo player or in a Clan. You will have a progress bar on your Navigation that displays this. This number is just total earned, they do not need to be kept (i.e. you can earn and spend and it still counts toward this reveal goal).

Players can work together or alone to obtain Animo Beacons which can be exchanged for a variety of new and returning Rewards including:

The Animo rewards are found by speaking to Ergo Glast in the Perrin Sequence room in any Relay.

Each player's best score is determined by most Animo Beacons collected in a single mission.

Clan Scores are calculated based on the sum of participating players best score.

To Get THE OPERATION: AMBULAS REBORN TROPHY at the end of the Operation, the clan must reach the following scores: 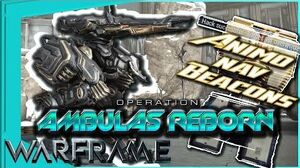 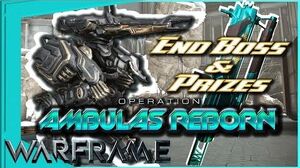 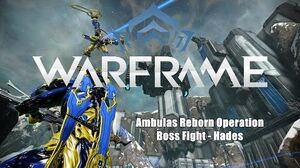 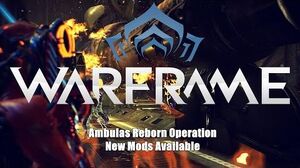 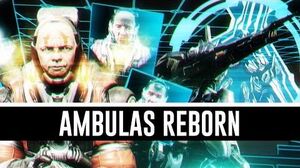 Operation Ambulas Reborn & All You Need To Know (Warframe)
Retrieved from "https://warframe.fandom.com/wiki/Operation:_Ambulas_Reborn?oldid=2098749"
Community content is available under CC-BY-SA unless otherwise noted.