The Archwing
Replayable
Intercepted Grineer communications reveal that Grineer have been experimenting with some sort of bio weapon. You must investigate.
—Quest Description

Once Awake is the second main storyline Quest that introduces new players to the Infested faction, as well as the Spy and Defense mission modes.

As of the Update: Specters of the Rail 0.0 (2016-07-08), this quest is unlocked through the Mercury Junction, on Venus. The tasks required for any junction can be viewed by mousing over the junction in your Star Chart.

Dr. Tengus, a Grineer doctor, has been experimenting with a bio-weapon of some sorts and the player is tasked to investigate. The player discovers that this bio-weapon the Grineer was working on was a strain of the Infestation that survived the events of The Old War. After a failure in a testing lab, the Infested broke out from quarantine and invaded Grineer outposts and ships on Mercury. As the possibility of an Infested outbreak was a threat to the Origin System, the Lotus commands the player to eradicate the Infestation. With the help of a Cascade Bomb infused with Void energy, the player successfully eliminated the source of the Infestation. However, because of the continued research efforts of Dr. Tengus, the System is not immune from future outbreaks.

The quest begins upon receiving the following message from The Lotus:

We have intercepted and partially decrypted a disturbing Grineer communication. A Grineer doctor by the name of Tengus claims to have uncovered some sort of new bio weapon. We have few details but the message originated out of M Prime.

You need to go there and investigate.
—The Lotus

The player is then tasked to a Grineer Spy Mission on M Prime, Mercury to collect three data units for retrieval from a Grineer Asteroid base. During the mission, the Grineer Dr. Tengus is revealed through intercepted transmissions to be working on "specimens" to be used in the development of his bio weapon.

After the first data unit is recovered, Tengus' assistant expresses anger that the Tenno are there, demanding absolute secrecy in their project and thus ordering the marines to assault the Tenno.

After the second data unit is recovered, panic breaks loose as the Infested has broken free from quarantine, with the effect of Infested units now appearing to fight both Grineer and Tenno. Despite this, it appears that there may be an unknown third party involved, as the Grineer soldiers blame Dr. Tengus for the outbreak, while the Lotus implies that someone else released the Infested on purpose.

After the third and final data unit is recovered, the Lotus briefly explain what the Infested are and how they disappeared a long time ago. The mission is considered complete if the player reaches the extraction with at least one data unit extracted.

The next mission takes place in Terminus, Mercury, where players are tasked with exterminating all Infested units aboard a Grineer Galleon overrun by the Infestation. Upon completing the mission, the Lotus will message the player to reward them with the

This is from one of Doctor Tengus' reports:

"The additional test Marines have arrived. The specimens tore through previous batch much faster than expected. It should be noted that Marines who survived the longest were using fire based weapons."

The Infested are vulnerable to fire. I have sent a fire damage mod for you to install on your Melee weapon. It should aid you in your coming mission.
—The Lotus

The Lotus sends the Tenno to Lares, Mercury, in an attempt to destroy the Infested there by using a Cascade Bomb planted on the asteroid's power core, that will use Void energy to eliminate all organic life while leaving the structure intact. This mission takes the form of a Defense mission where the player has to prevent the Infested from destroying the Power Core for eight waves. Notable differences from the standard Grineer Asteroid defense mission includes the large masses of Infested biomass surrounding the power core and having only two access points to the core instead of three. During the mission, the Lotus makes note that while the Infested appear to be mindless, they seem to know what the Tenno are up to and are trying to stop them.

After the mission is completed, the Lotus will message players to reward them with a

The Cascade explosion worked and the asteroid has been purged of infestation. But I'm afraid this threat cannot be so easily contained. Doctor Tengus' experiments with this plague are grossly irresponsible and have threatened the entire system. All that is needed is an infected ship to reach a populated area and we'll be unable to contain its spread. There's no controlling it, the Grineer will be in just as much peril as we are.

To prepare you for this new fight I have sent you something that should prove effective against this menace. Let us hope you will not need to use it.
—The Lotus

An additional intercepted message will be sent to players detailing a report by Doctor Tengus' to the Twin Queens, blaming the Tenno for the outbreak at the facility and taking credit for its destruction while claiming the Tenno have obtained Infested spores and will use them against the Grineer:

It is my shame to report that Tenno interference has caused a breach of our Infested testing lab on M-Prime. Acting immediately, I ordered the destruction of the facility which has contained the outbreak. Tragically, I believe the Tenno have stolen spores with the intent to use the plague against us.

I will act at once to develop a countermeasure, I will not allow this unethical behavior by the Tenno to threaten our glorious cause. 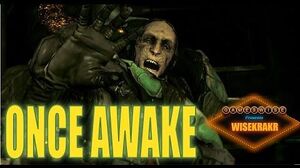 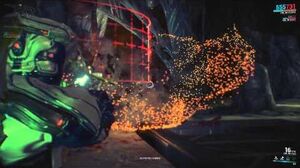