The Ogris is a Grineer rocket launcher that fires

Blast rockets that explode over a small area, but can also damage the player if they aren't careful. A slower projectile version of this is used by the Bombard, though the homing ability isn't present on the version used by the Tenno. It can be researched from the Chem Lab in the dojo. 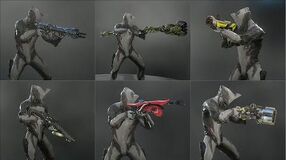 Retrieved from "https://warframe.fandom.com/wiki/Ogris?oldid=2066645"
Community content is available under CC-BY-SA unless otherwise noted.