Build the Mandachord and find the cause of Cephalon Suda's erratic behavior.

Octavia's Anthem is an optional solo-only quest introduced in Update 20.0 (2017-03-24). This quest focuses on Cephalon Suda and the mystery behind her obsession with music and the resulting glitches that may hide a darker secret. Completing this quest will reward players with the blueprint for the

The tie-in webcomic What Remains can be found on the official website.

The Octavia's Anthem quest can only be unlocked once players have completed The Second Dream.

The quest is started by visiting Cephalon Suda inside a relay where Cephalon Simaris will abruptly tell the player to disregard anything Suda says, complaining about her obsession with music (which he regards as a pointless waste of data). Suda will greet the player and begin expressing her thoughts on music. She will also be noticeably erratic in her train of thought. From there Suda will ask the player to build the "Mandachord", an artifact blueprint given to the player by Suda. Simaris will immediately mock Suda's interest in music, and suggests she be decommissioned due to corrupted precepts.

On accepting the quest, the player will receive a blueprint for the Mandachord. In order to complete the Mandachord, players must embark on a mission to find the remaining three components - the Mandachord Body, Mandachord Fret, and Mandacord Bridge - on a Corpus base in Neptune.

Once the player enters the mission they will be accompanied by an unknown white light that leaves behind a bright purple trail as it moves accompanied by music. The player must follow this light as it will guide them to each individual component's location. The components will be inside a container where the player can press the context action to pick up the component.

Once the Mandachord Body, Fret, and Bridge have been collected the light will fade away and Suda will tell the player to extract.

On finishing the Corpus mission, Suda will ask the player to craft the Mandachord.

Suda will relay Ordis coordinates to the next mission location, though Ordis will express his concern about Suda's state to the player.

The next mission will be a Grineer underwater base in Uranus, with Suda musing about the relationship between the song fragment and the base. The player must find an Orokin artifact the Grineer have recently uncovered called a Hydraulus. On using the Hydraulus with the context key, a special UI will appear, composed of a concave table with several rows and columns, which then begins playing music, and Suda recognizes the music as belonging to "Octavia's Anthem". In order to proceed, players must add resonant beats to the song by activating the appropriate bar positions (out of three possible) in the top row of each column as indicated by the height of the glowing blue symbols that appear on top over of the chart each time the beat passes it. Once the beats are correctly added, Suda remembers that more of the song can be found on Lua, with players being able to extract at this time.

On the Orbiter, Simaris urges the Tenno to discontinue their quest and destroy Suda lest her corruption affect the other Cephalons. Ordis and Simaris get into an argument regarding their course of action with Suda, with Ordis wanting to help, while Simaris mocks Ordis' "compassion-glitch" and tells him that his actions could endanger both themselves and the Operator.

During the mission, Suda once more forgets why they came to Lua, and with a reminder from Ordis, realizes that Simaris was right, and that the corruption infecting Suda is not benign. Apart from that, the entire map will be eerily devoid of any enemies, only occasionally encountering groups of Grineer corpses. The player then finally encounters a pair of Sentient Battalysts to Suda's horror, before she is taken over by a malignant presence that Ordis recognizes as Hunhow. Having taken over Suda, Suda-Hunhow orders his Sentients to find the song fragment.

Players must fight the Sentients in order to get to the Hydraulus, and once located must exterminate all Sentient enemies within the room and any additional ones pouring in, in order to access the Hydraulus. Similar to the previous instance, the correct resonant beats must be added to the musical chart (this time in the second row with five possible positions per column) in order to complete the music. Upon completing the puzzle, Suda regains herself for a moment to ask Ordis to apologize on her behalf to the Operator, before Hunhow once again reasserts control. Ordis then asks players to extract once more, while an infinite amount of Sentients will continue to spawn during their escape.

Harness the power of an Orokin Tower: Taranis, Void[]

Another argument ensues between Simaris and Ordis on their course of action against Suda, with Ordis reaffirming his stand to free Suda from Hunhow's control, as he managed to receive the coordinates of the last song from Suda.

Inside the Tower, the player will be attacked by "Decaying" Sentient enemies, surrounded by a red aura but no less deadly. Ordis expresses surprise at the presence of Sentient units inside the Void - a fact long thought impossible - and surmises that Hunhow is using Suda's energy to shield them (though not perfectly) from the Void's effects. Upon locating the room in which the Hydraulus is located players can use a nearby console to lock the room, preventing additional Sentient units from entering and allowing players to clear the room of any remaining enemies. Only after all enemies are cleared can players start on the Hydraulus puzzle, which like the previous instances requires matching resonant beats with the provided figures.

Unlike with previous instances, solving the Hydraulus puzzle does not rouse Suda and instead attracts Hunhow's attention who claims that Suda has been eradicated. Ordis draws up a plan to make Suda hear the anthem by using the Orokin Tower to boost the signal. Players must then find a console that they can activate to amplify the signal, which will count up to 100%. Hunhow will send in Sentient units to disrupt the amplification, freezing the counter, and players must destroy them to allow the counter to proceed.

After the amplification is complete, players have to activate the Hydraulus again, which angers Hunhow, making him try to attack Ordis. Despite this, Ordis is able to point the players to the location of a second amplifier, which players must activate and then bring to 100% amplification similar to the previous one. Completing this task will make Ordis try to save Suda by directly interfacing with her, though he falls silent afterwards, but all sentients will then disappear. afterwards, an extraction marker will note to players that they can extract when ready.

Go to Simaris in a Relay[]

Back on the ship, an inbox message will open, containing a recorded transmission from Ordis stating that the Operator will only receive that message if he failed to save Suda, then asks players to go to Simaris and try to contain Hunhow before the Sentient infects more Cephalons, and finally saying farewell to the Operator after reminiscing about the past.

Speaking with Simaris in a Relay with the prompt "Suda's Datascape?", he mentions that Cephalons are able to create alternate reality datascapes for various functions, including training rooms and the Sanctuary, and questions if the Tenno wish to go after Ordis despite the risk with the Sentients entangled in his code. Players can either ask Simaris to help them ("Yes, I am. Help me"), or question Simaris more about Hunhow's intentions ("Hunhow's intention?"). Simaris states that while he won't endanger himself or his Sanctuary, he can send the Tenno to Suda-Hunhow's datascape.

Upon being synthesized into the datascape, players are greeted by the virtual visage of Hunhow in the middle, and a circular ring made up of floating blocks of differing colors representing the Mandachord. As Hunhow boasts about his successes, Ordis clues in the player that they need to recreate the music of Octavia's anthem inside the datascape's Mandachord in order to defeat Hunhow. This particular part of the mission has unique mechanics:

The player's goal is to step on the blocks with the yellow spheres in order to unveil the musical notes, while removing any errant notes while at the same time preventing the formation of more errant notes. Once the player completes the music, the notes will begin firing rhythmical barrages at Hunhow's avatar, damaging him.

Upon depleting the first third of Hunhow's health, players are ported into another Mandachord set, where they must repeat the process again but with more dark-brown platforms. In this second stage, Sentient avatars called Eradicysts will spawn, attacking players with ranged projectiles, and preventing players from activating musical notes if they're hovering over one. Despite their menacing nature, Eradicysts can be easily destroyed through most weapons fire in a single hit, having significantly weaker health and defenses than true Sentient enemies, mostly serving as a hindrance rather than a threat. Once enough musical notes are activated on the second stage, Ordis will be able to break free from Hunhow's control and join the battle, attacking any Eradicysts in the way, though he will be forced to retreat should he sustain too much damage.

A third stage will commence once the second third of Hunhow's health has been depleted, with the same mechanics but with more blocks to contend with, and a greater number of Eradicysts will spawn to attempt to stop the player. During this phase, Cephalon Simaris enters the datascape, providing fire support by spawning in virtual representations of units from his Sanctuary such as Grineer Heavy Gunners. These will invariably be destroyed periodically by Hunhow's beam, but will draw fire from the Eradicysts before then. Completing this final stage will destroy Hunhow's manifestation completely, freeing Suda from his control and restoring her datascape.

In the aftermath, Suda awakens, but does not remember recent events due to short-term memory loss. She thanks both Ordis and Simaris for saving her, though Simaris (rather unconvincingly) claims that he merely did it to preserve the Cephalons' weave. As gratitude to the player, Suda rewards the blueprint for the

Octavia Warframe at the completion of the quest. 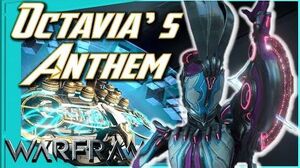 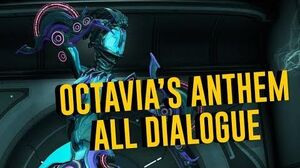