A striking armor design of unknown origin. Extensive scans of the Orokin record reveal nothing.

The Nyx Nemesis Skin is a Deluxe Skin for Nyx.

The Nyx Nemesis Skin was available for purchase for

It is now available for purchase for

‍200, or as part of the Nemesis Complete Pack for 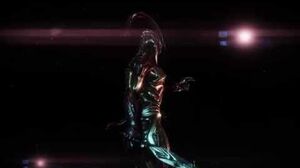 Nyx Nemesis Armor
Add a photo to this gallery

Retrieved from "https://warframe.fandom.com/wiki/Nyx_Nemesis_Skin?oldid=1270307"
Community content is available under CC-BY-SA unless otherwise noted.