The Nullifier Crewman is a Corpus Sniper Crewman that carries a power pack on its back. When alerted to a hostile presence, a Projector Drone is deployed from the pack that generates an energy field beneath it. The spherical field not only prevents projectiles from entering (similar to a

Snow Globe), but also dispels any present buffs as soon as players enter it. The field also prevents any abilities from being cast within its radius and destroys most powers in its radius. Firing at the globe causes it to gradually shrink and eventually dissipate altogether, forcing the drone back into the pack, from where it will re-emerge after a brief period. The projector drone itself resides at all times outside the field, orbiting above the crewman, and destroying it permanently removes the crewman's ability to project the barrier.

Nullifier Crewman shown in the codex 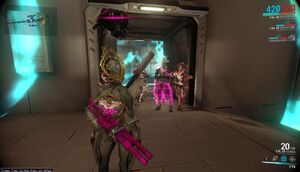 Showing that Nullifier crewmen can be controlled, despite their description