Nox Chemical Launcher (similar to the

https://www.warframe.com/droptables
CODEX
Toxic to the core, Nox lobs exploding poison goo at enemies. Rupture his helmet to expose his head but beware of the unleashed noxious gasses.

The Nox is a type of Grineer "Chem Strike" unit. They wield a poison-filled heavy gun that shoots blobs of

Toxin sludge which stick to targets and surfaces before exploding. Bloated and disfigured by the very chemicals they wield in combat, these vicious warriors wear crude, heavily armored suits that both protect them in the form of Overguard and serve to contain the noxious clouds they emit.

Breaking the glass cover protecting their heads removes their defenses, but releases the poisonous aura to their surroundings. Beware of their final moments, as they explode into a lethal cloud upon death. 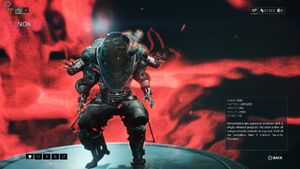 Demolisher Nox as seen on The Codex