WARFRAME Wiki
Register
Don't have an account?
Sign In
Advertisement
in: Enemies, Enemies With No Drops, Lore,
and 6 more
English

None
I am Nihil. Glassmaker. Order. Shall be. Restored.
—Nihil

See, in the old days, crime and punishment was all in the hands of those Orokin judges, the Seven. Mercy was a quick flash of the Jade light... But - if they wanted to make an example, they'd suck up your soul and make you a prisoner of the glass, forever.

Seems like magic to us nowadays, but dreamers... someone's got it puzzled out again. Waves are buzzing, new glass is showing up. Souls getting snapped up and trapped up. All we've got to go on is this crime-simula I pulled from the weave. No sign of our killer and not a soul to tell us where they went...
—Nora Night on the Glassmaker

Nihil is a mysterious serial killer known as the Glassmaker, a former Orokin judge responsible for "glassing" people throughout the Origin System. He is also the creator of the Cephalons, which he designed to be an eternal punishment for those that dare break Orokin law. He was introduced during Nightwave: Series 3 - The Glassmaker.

During Series 3 , after defeating Nihil, the player received an inbox message from Nora Night containing the

During Nightwave: Series 3 – The Glassmaker, Nihil was fought after completion of Episode 5's Crime-simula and memory weave. Once the fight was accessed, a crystal would appear in the Crime-simula that would lead directly to the Nihil fight, costing no Cephalite Resonance.

60x Cred. After installing the Oubliette decoration in either the Orbiter or Clan Dojo, interacting with it (default: X ) with the Enter Nihil's Oubliette Key in the player's inventory will display a prompt of whether the player wants to start the mission of the boss fight.

Dreamer, I think I know who the Glassmaker is... or... who he was... Nihil. Every Ceph you ever met was once a person, before they met him. He made them all. For them. For the Orokin. As a punishment that would never end.
—Nora Night

Nihil was the creator of the Cephalons: former humans who violated Orokin law, and were thus punished by being transformed into immortal, digital intelligences after their respective executions. These Cephalons were stripped of their past memories as living beings and were reprogrammed to serve the Orokin in various tasks.

The Glassmaker resurfaced and brought attention to himself after glassing Shigg, an Ostron who attempted to illegally sell material from the Tower of Unum on the black market. His next victim was Bak Vondu, a "selfless" Corpus who attempted a solo gig but accidentally unleashed the Glassmaker in the process. The third known victim was Gral, a Grineer defector who was "chaotic" to Grineer "order". His fourth victim was Cutter, a Solaris United who became a Corpus mole after becoming victim to the Deck 12 incident, and manipulated the other three victims into creating a device to release the Glassmaker across the Origin System. All of the victims shared a pattern: they rebelled against their respective faction's established way of living.

The Tenno work with Nora Night and investigate the Crime-simula she pulls from the Cephalon Weave to investigate the source of the glassing. As they uncover evidence related to the victims, the Tenno enters Nihil's Weave and hears his voice as he explains his motivations for committing the murders; he wants to bring his own form of order to the Sol System.

Nihil is tracked to his former lair, where he proceeds to berate the Tenno for the collapse of the Empire and the subsequent descent of the Sol System into endless chaos and mayhem. In his lair, the Tenno discover a glassed Orokin corpse, realizing the Executor had glassed himself to escape the slaughter of the Orokin by the Tenno and the subsequent collapse of the Empire. Thanks to the actions of his four victims, Nihil is now able to spread his influence across the system and begins glassing numerous victims in an attempt to bring an end to the chaos in his own twisted way. He then glasses Nora Night, before setting his sights on the Tenno. However, the Tenno fight back inside the weave and free the glassed victims, turning them against Nihil and trapping him in his own prison. A freed Nora Night delivers the oubliette containing the Glassmaker to the Tenno, entrusting them to ensure the Glassmaker is never set loose again.

Later on, while gaining ranks among The Holdfasts, it will be revealed that Quinn once had the authority to punish convicts by glassing, implying that such authority is not exclusive to Nihil only, and even possibly suggesting that the two may have had a previous connection.

Inside Nihil's weave, the Orokin judge appears as a giant but stationary figure, surrounded by multiple glass platforms. Nihil will attack by throwing Glass Shards which will slow the Tenno upon hit, and the

Vitrica sword which will instantly kill them regardless of bleedout while also being able to destroy platforms. The Tenno, unable to cast abilities or use weapons, must make extensive use of their dexterous movement to avoid his attacks. If the Tenno fall off the platforms, they will respawn on a temporary platform of higher elevation.

Nihil possesses three health bars and starts out invincible. To remove his invincibility, the Tenno must pick up Glass Shards that hit the platforms and throw them via primary fire button at floating glass crystals containing relevant evidence floating around the room, which must match evidence acquired in previous Glassmaker episodes, which can differ between players. Once the relevant evidence is freed, Nihil will lose his invulnerability, and the Tenno can throw Glass Shards back at him to damage a third of his bar. Since Nihil aims his shards at the Tenno's center of mass, standing at the back end of a platform can make him miss entirely, denying the Tenno a shard to throw back.

The process then repeats for each health bar, during which platforms will be repaired and Nihil will start to Teleport, until he is defeated. 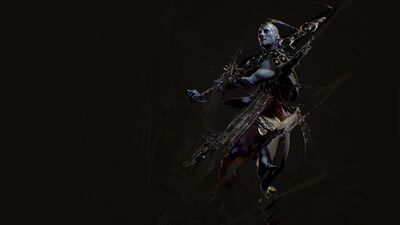 Are you prepared to face Nihil once again, Tenno?

Nora Night’s Cred Offerings will provide both the Nihil Key and Oubliette required to face off against Nihil. Once you have acquired both, interact with the Oubliette Decoration to fight.

The Nihil Key grants you one fight against Nihil, at which you’ll need to acquire another Key to go again. Nora Night will offer the Nihil Key in her Cred Offerings periodically.

For those who did not originally fight Nihil during Glassmaker, using this Key route will grant you the Vitrica heavy blade. Tenno who have already acquired the Vitrica can enjoy an End of Mission Riven Mod reward!

Look for the Nihil Key in next week's Cred Offerings!