Series 3 introduces a mysterious Cephalon known as the "Glassmaker", named for crystallizing its victims into glass, a form of punishment used in the old Orokin era.

This series introduces a new interactive mechanic where players must perform detective work on the Glassmaker's victims to uncover the mystery behind the murderer. 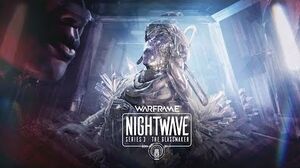 Retrieved from "https://warframe.fandom.com/wiki/Nightwave/Series_3?oldid=2092669"
Community content is available under CC-BY-SA unless otherwise noted.