Rockets disperse napalm, inflicting 30% damage over 6s across 90% of the explosion area.

Ogris-exclusive mod that, upon striking an enemy or object, will form small pockets of fire within a sphere around the impact area. The fire will deal 30% of the weapon's modified base damage as

Heat damage with 68% chance to proc over 6 seconds. 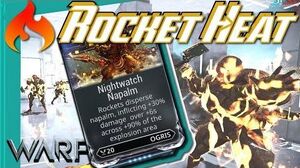