The Infestation dwelling within

Nidus mutates rapidly when used against his foes, fueling his abilities and yielding various symbiotic benefits. Nidus possesses various passive mechanics highlighted in the tabs below:

Mutation Stacks are a resource unique to Nidus, indicated by the Mutation counter and gauge displayed in the lower-right on the HUD, above the ability icons.

If Nidus suffers fatal damage with at least 15 stacks of Mutation, Nidus will consume the 15 stacks to avoid bleedout while receiving 5 seconds of invulnerability and restoring 50% of his health. 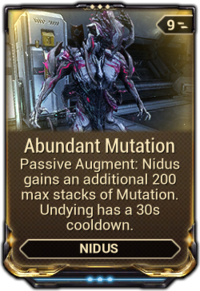 Abundant Mutation is a Warframe Augment Mod for

Nidus' passive that increases the amount of max stacks that he can carry but adds a cooldown of 30 seconds to his Undying passive.

Unlike most frames, when Nidus ranks up he receives a special set of rank bonuses which are indicated at the top-left of the Warframe Upgrade screen:

Note that these bonuses are gained only by leveling up. Gaining Mutation stacks will not increase said bonuses. 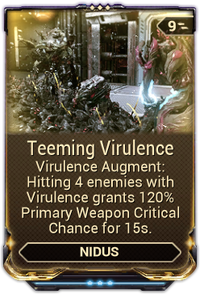 Teeming Virulence is a Warframe Augment Mod for 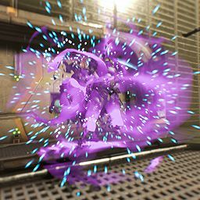 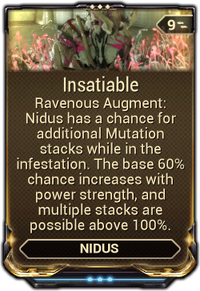