For the enemy, see Necramech (Enemy).

Look, you were the second wave, kid. The Necramechs were Void-shielded, Sentient-pulse immune... as bright as a bag of hammers and just as dependable. Not like you.

The Necramechs are Entrati war machines encountered on the ruins of Cambion Drift, Deimos. They are heavily armored bipedal war machines built during The Old War as a predecessor to Warframes, though they were far less intelligent. The Tenno are capable of accessing these Old War relics using their Transference, and can deploy them in Landscapes.

Necramechs can be piloted by an Operator (which requires completion of The War Within) via Transference, whether they are found inactive in the fields of the Cambion Drift during Fass or owned by the player. An Operator only needs to initiate Transference (default 5 ) when near an operational inactive Necramech in order to board them. Necramech wreckage eligible for Transference can be identified by a blue aura emanating from them. These Necramechs will only have Rank 0 base stats with no mods, though they will have all of their abilities at max rank, and use an unmodded

Mausolon as their default weapon.

Players can craft their own Necramechs through the Necraloid Syndicate. A built Necramech takes up one Necramech slot. Players start out with four Necramech slots by default and more can be purchased from the Market for 20 Platinum

20 each. Alternatively, pre-built Necramechs can be bought from the Market for 375 Platinum

375, which come with a free pre-installed Orokin Reactor and a Necramech slot.

Necramechs are capable of walking, jumping (default Space ), and slide dashing (default tap Shift  + any directional key). For more advanced maneuvers, the Necramechs have an Engine gauge denoting fuel, which is consumed when performing its unique movement techniques, and naturally replenishes if the Necramech is standing still or using standard movement (it will not replenish however during falling from heights). Sprinting (default holding Shift ) also consumes the Engine gauge.

The Necramech has two advanced maneuvers unique to it:

Once the Fuel gauge has been depleted down to the last 5% remaining, a soft warning beeping sound will play until the Fuel recovery has kicked in.

Necramechs can crouch (default holding Ctrl ), but only while stationary and cannot crawl; combining crouch with movement will result in a slower walk with the Necramech maintaining its standing height. Likewise shooting and/or aiming while crouched will cancel out and force them to stand up for the action.

Despite their tall height, Necramechs are capable of walking through small passageways and doors were they shouldn't fit through, causing their helmets to scrape against the ceiling.

Necramechs have an innate 6 meter

Vacuum-like effect that draws in pickups.

Necramechs are unable to interact with objects that require the Use key (default X ), thus they are unable to hack consoles, carry objective items, grab pickups like Ayatan Stars, and revive allies.

None
Necramechs come with 4 abilities unique to each chassis, and like Warframes require Energy to use. For their primary weapons, Necramechs can be armed with any Arch-gun even if it doesn't have a Gravimag installed, with regenerating ammo. They do not have an equippable melee weapon, instead using arm swipes (Pugil) and aerial ground slams, both of which can powerfully ragdoll enemies. Necramechs are able to fire their weapons and perform abilities that can be used in mid-air while hovering.

Necramechs are immune to knockdowns, staggers, and Status Effects and they cannot be affected by special enemy incapacitation abilities such as the Deimos Tendril Drone's latching attack. However, they are affected by the energy residue left by Vome and Fass as well as Leech Eximus' energy drain and they are slowed by Arctic Eximus' auras and Nox's sludges.

Warframe abilities cannot directly affect a Necramech, however they can still make use of abilities such as

Electric Shield and shoot through it for additional damage, or utilize cover abilities such as

Snow Globe to avoid enemy fire. They are affected by allied unit effects however, such as gaining bonus shields from Shield Ospreys and damage resistance from Ancient Healers, either in Specter form or spawned/turned friendly through Warframe abilities.

They can be repaired using:

They do not benefit from:

The Necramech features 12 mod slots unlike other vehicles (e.g. Archwings or K-Drives). To compensate, each polarization increases its rank by 2 up to a max of 40 after 5 Forma, increasing mod capacity to a total of 80 at rank 40 with an Orokin Reactor installed. Additional polarizations can be added when the Necramech reaches its new max rank at that polarization level. Each additional rank also gives Mastery Rank Experience, giving 8,000 points in total.

Player-built Necramechs can be equipped with the following Necramech exclusive mods:

Necramechs can have their appearances customized with various skins and helmets. Notably, if a player owns more than one model of Necramech, the helmets from those models can be used on other Necramech models as well (e.g. owning a Bonewidow will allow players to use the Bonewidow helmet on a Voidrig). 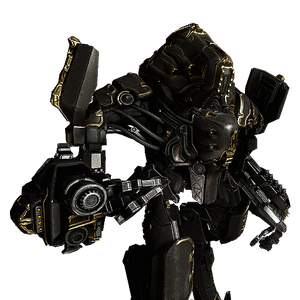 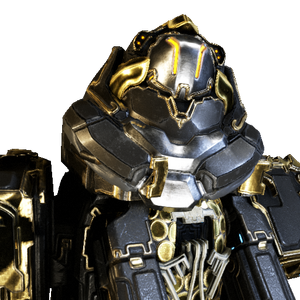 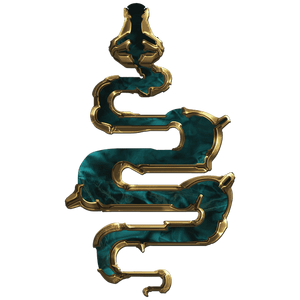 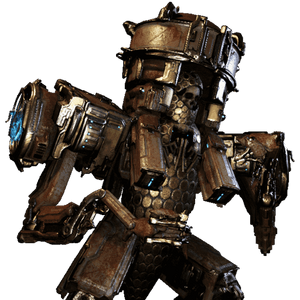 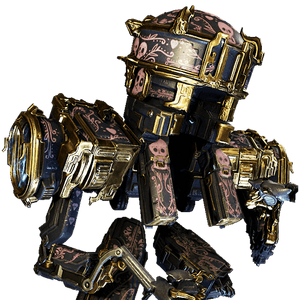 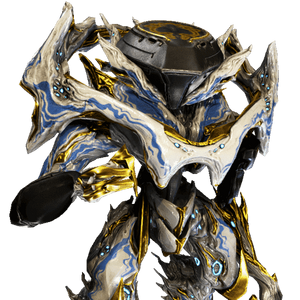 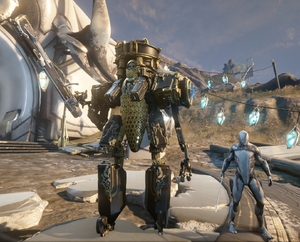 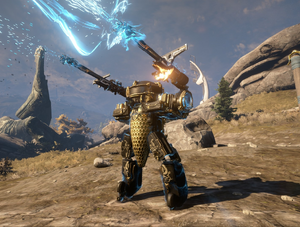 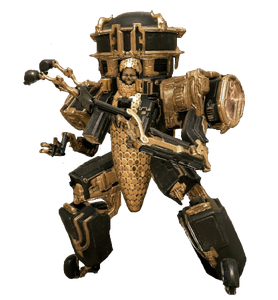 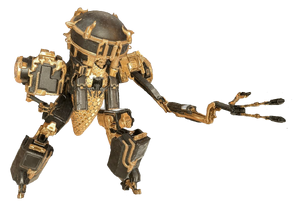 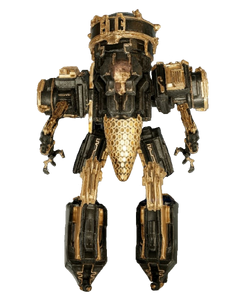 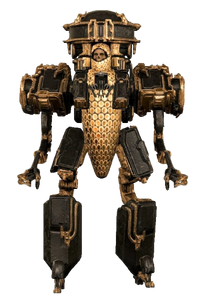 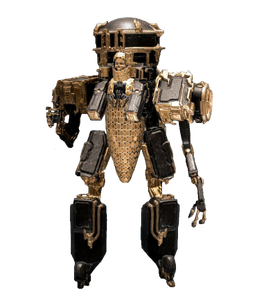 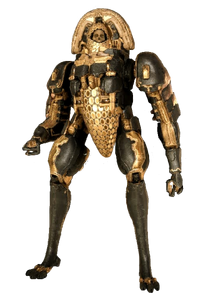 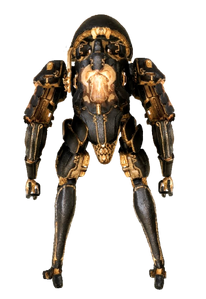 Necramechs have started to play a vital role within the System - from being part of the Railjack experience, to a great tool in our Open Worlds. While their firepower provides an advantage, the time and resource investment required to obtain one has shown to be a deterrent to newer players. As The New War approaches, we aim to alleviate that initial friction and provide an easier path of obtainment.

Enemy Necramechs now have a 50% chance to drop a Necramech part across the board, evenly distributed. The battle required to defeat an enemy Necramech is not easy nor quick. This increased chance of getting a Necramech part helps to reduce the time investment  needed in order to gather the mandatory parts to build your first Necramech.

Additionally, we’ve halved most of the Mining/Fishing part costs for crafting the Voidrig as this is the ‘first’ Necramech players see in the Heart of Deimos quest, so we want to make acquiring it a little easier. Bonewidow has been left as is as a longer-term goal.

When we first introduced Necramechs to Warframe, they did not have a “head” component that you could change. You just owned an entire Necramech and that was it. In order to increase the cosmetic flexibility of Necramechs we made the head modular, giving you the ability to change it the same way you can change a Warframe’s Helmet. A script was run that retroactively gave you the Helmets of Necramechs you already owned so you didn't have to build them again to get the Helmet.

A mistake in that script caused players to receive extra copies of the Mausolon gun (which comes with Crafting/Claiming a Necramech in the Foundry), but without increasing your number of Archwing Weapon inventory Slots to hold them. This caused players who had already filled up their Inventory Slots to receive an error message that said "Invalid slots: Contact support" when trying to build a new Necramech or Archwing weapon. Selling the excess Mausolons you received would only temporarily suppress this error because as soon as you built another Arch-gun, you would again own more Arch-guns than you owned Inventory Slots.

The fix: upon login, if you own more Arch-guns than Slots, your Inventory count is corrected in the backend. You will still receive the "Invalid Slots" error if you try to claim a Necramech or Arch-gun from the Foundry, however, when you sell excess Arch-guns or buy Slots from the Market, the problem fixes itself for real instead of just suppressing the error message.

This fearsome Necramech, fashioned in honor of the Entrati matriarch, is a robust front-line fighter. Favoring armor and health over shield strength, Bonewidow can grab and hurl enemies, deploy a heavy shield for personal defense, and cleave through opposing ranks with a massive warblade.

Skewer and hold a target. Use again to hurl the victim damaging them and anyone near the impact site.

Sweep surrounding enemies into the line of fire with a force beam.

*Acquire the Bonewidow Blueprint and the required parts from Loid for Necraloid Standing!

Blast through enemies with a double-barreled shot of energized slugs. This siphons their life essence which is then used to generate the secondary fire’s massive air-burst mortar. The ancient Entrati weapon was built for Necramechs but also functions as an Archgun.

*Acquire the Morgha Blueprint and the required parts from Loid for Necraloid Standing!

Find these Necramech Mods as rewards from the new Isolation Vault Bounties or from Loid for Necraloid Standing!

Fixed being able to use Emotes in Necramech as a Client. Mr.Roboto no more.

This distinctive serpentine Sigil adds venomous menace to any Necramech. As a bonus, a Warframe compatible Snake Sigil is included when purchasing the snake Necramech Sigil!

Rusty but trusty. This skin revives the glory of the legendary Old War Necramech, Snake.

*Find both the Snake Necramech Sigil and the Snake Voidrig Skin with the Necraloid Syndicate for Platinum in the Necralisk!