The Second Dream
Replayable
Strange drones have appeared in the Origin System, help the Lotus find out what they are and who sent them.
—Quest Description

Natah is a main quest involving the mystery behind a strange drone that appears interested in the Tenno, as well as hints to the identity of the Lotus.

Completing this Quest will award players with an Exilus Adapter and allow the purchase of their blueprints from Cephalon Simaris, and be able to partake in Disruption missions.

On Uranus, the Tenno encounters strange drones that seem to be looking for something... or someone. Upon scanning them, the Lotus will ask the Tenno for their assistance. Assuming that they are of Corpus origin, Lotus sends the Tenno to Earth to investigate these drones, only to discover an Old War wreckage which heightens her confusion. In an epiphany, the Lotus realizes these drones are Sentient Oculysts, cutting off transmissions immediately with the Tenno. An individual of the Orokin-era, Conclave master Teshin offers his aid to unravel the truth about the mysterious Lotus, suspicious of her true motives.

The Lotus seduced the Tenno. Led them on a complacent path like oxen. I failed the Orokin but I will preserve their legacy. The Tenno. Now is the time for action. Cast off your harness and become a pupil of The Conclave. Through trial combat, I will prepare you for the evils beyond the Outer Terminus. A warrior only grows if they face the ultimate enemy. Themselves.
—Teshin's introduction to Conclave

In search for information on these drones, Grineer scientist Tyl Regor has lead efforts in excavating a tomb from the Old War in the depths of Uranus. The Lotus suddenly reappears, pleading to the Tenno to stop Regor from entering this tomb. Their efforts were in vain as Regor accidentally awakens a Sentient, that being Hunhow, destroyer of worlds:

...Natah, where are you? You cannot hide from me.

The Lotus reveals that her old name was Natah when she in her Sentient form, ordered to eliminate the Tenno during the Old War. From the Tau System, where the Sentient stronghold resides, she crossed the Void to reach the Origin System and complete her mission. However, because the Sentients were programmed by their Orokin creators to be vulnerable to the Void as a safeguard against a rebellion, the Lotus subsequently lost her ability to procreate. With the Old War coming near at the end, there was no need to kill the Tenno. Wanting children on her own, the Lotus decides to hide them away in the "second dream".

Once the daughter of Hunhow, the Lotus betrayed her own kind out of selfishness to become a mother. Hunhow will soon finish where the Lotus had failed: elimination of the Tenno.

This quest is initiated after successfully scanning an Oculyst using either a Codex Scanner or a Synthesis Scanner when the player encounters them in a mission on the Grineer Sealab tileset of Uranus (the player must complete the mission and extract successfully after scanning one out of the two drones in order for the quest to start). Only Players with Mastery Rank 3 or higher will have a chance at encountering the drone, although they can be encountered by lower Mastery Rank players if the host is 3 or higher. Completing missions on the Grineer Sealab tileset will additively increase the chance for a Strange Drone to appear[1].

As the quest begins, the Lotus will send an inbox transmission with the message:

Tenno, I require your help.
—Lotus

The Lotus sends the player to Gaia, Earth with the task of scanning more of the mysterious drones which the Lotus presumes to be of Corpus origin. Players will initially have to track down the drone's location while defending themselves against any Grineer enemies in the way. After a while, the Lotus will mention that the drones don't seem interested in the Tenno and that scanning their objective may determine what the drones are up to. Players at this point will have to scan a large, unique wreckage hanging off a cliff in order to proceed.

Upon scanning the wreckage, the Lotus quickly recognizes the structure as an Old War wreckage, which furthers her confusion of why the Corpus are suddenly excavating the build. Players will then continue their mission to find out more information from the mysterious drones, to which two new targets will then be marked on the map to scan. These targets must be scanned or the mission will result in a failure.

After scanning the last drone, the Lotus was both surprised and horrified to identify the drone as an Oculyst – To which she quickly warns the Tenno to stay safe and immediately cut off her transmissions completely, leading Ordis to temporarily act as the mission operator. Clearly, in shock and disarray at the situation, Ordis directs the operator to quickly head to extraction.

With the Lotus seemingly abandoning the Tenno, Teshin offers his help in unraveling the Lotus' secret. Teshin sends the players to a Grineer Galleon in Cassini, Saturn, in order to obtain more information about the mysterious appearance of the drone, which Teshin describes as "a menace long thought dead". He persuades the Tenno to hack into three Grineer Consoles in a Mobile Defense fashion, of which he also repeatedly iterates that he will not hide the spoils of their labor.

Upon finishing the mission, Teshin is able to successfully intercept a message by Tyl Regor, which he sends to the player's inbox:

You want to know why they are here? Cause I found it! The tomb! They should all be dead... trapped inside - but these ones are not, why?

Be brave, Scur, for your brothers, sick and twisted in the tubes! New ideas are within our reach that could cure us all. Send the Draga to reinforce the location we discussed.

Scur, if you saw too many words I'm sorry, I forgot who I was writing to, so assuming you just read the big letters...

The intercepted transmission points to the presence of a Grineer Sergeant named Sergeant Scur, a Drahk Master armed with a

Grakata, located in a Grineer Sealab on Sycorax, Uranus, where players are tasked with his capture.

The Lotus once again appears, quickly realizing that Teshin is leading the Tenno into more danger and immediately orders him to halt his intention, to which he argues at how she is afraid of what they'll find. She answers.

The SENTIENT.
—Lotus
You know this one, don't you?
—Teshin

After successfully obtaining the information of the mysterious tomb, the Lotus immediately orders the Tenno to stop Tyl Regor from entering the tomb.

The Lotus sends the players to a Survival mission on Ariel, Uranus, to which they have to fight against Grineer units for 10 minutes.

As the mission progresses, Tyl Regor manages to open up the artifact he is excavating despite warnings from Teshin - whom Regor identifies as a "pseudo-Tenno" - and the Lotus. After unearthing an Exilus Adapter from the ruins, Regor also manages to release a Sentient, who begins to refer to the Lotus as "Natah".

Back on the player's ship, the Lotus explains that "Natah" was her old name. Concerned about the appearance of the Sentient, the Lotus ordered for it to be contained by destroying the tomb it resides in.

The Tenno are deployed to yet another Sealab facility for a Defense mission on Desdemona, Uranus, where they are tasked with protecting a bomb that will destroy the tomb once and for all. For this mission, players must defend one of four objectives located at different parts of the map, with the vulnerable objective switching between each wave.

During the mission, the Sentient speaks to the Lotus, whom he refers to as his daughter, accusing her of betrayal. Through the conversation, it is revealed that Lotus herself was a Sentient, who had infiltrated the ranks of the Orokin to become the Tenno's handler.

Once the player accomplishes the mission, the Lotus further clarifies the nature of her betrayal: she was supposed to destroy the Tenno, but did not. She explains that Sentients become incapable of breeding upon arrival at the Origin system, with Teshin realizing that the Lotus desired children of her own, to which the Lotus affirms that she has become the Tenno's 'mother'.

In the aftermath, Tyl Regor, angered at his setback, challenges the Tenno to fight him, telling them that they know where to find him. 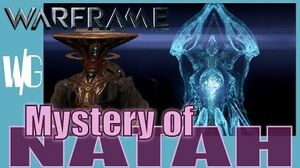 THE QUEST FOR NATAH Update 17 - who is the Lotus? 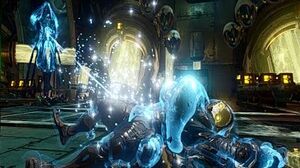