Carmine Penta that causes the grenades to leave a burning patch on the ground upon impact. The weapon also gains increased status chance, and its damage type is changed to purely Heat Damage

Heat and overall damage increased by ~73%.

Napalm Grenades could be obtained by reaching Rank 22 with Nightwave during Series 1 and Rank 13 during Intermission II. 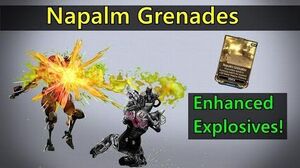