https://www.warframe.com/droptables
You've called this a disease? Heh, an Infestation? Well, I call it unity! One army under me! Welcome to your new species!
—Mutalist Alad V

Mutalist Alad V is a version of Alad V mutated and twisted by the Infestation. From his base on Eris, Alad V invented the Mutalist Strain, allowing the Infested to infect inorganic robotics and weaponry, before succumbing to the Infestation himself.

Upon completion of his assassination mission, player will receive the

In order to gain mission access to Mutalist Alad V, players must possess a Mutalist Alad V Assassinate Key, whose blueprint is awarded from the Patient Zero quest. One of the main components of the Key is Mutalist Alad V Nav Coordinate, which is a battle pay reward from Infested Invasions, Hyf/Terrorem (Defense/Survival, Deimos) reward, or resource caches from Hive Sabotage.

The key unlocks a node called "Mutalist Alad V Assassination" on Eris. Only the host will have their key consumed on mission completion.

For his lore before his infestation, see Alad V.

Mutalist Alad V was once one of the Corpus Board of Directors, portrayed as a man with a deep interest with the power of the Tenno which led to his various conflicts with the opposing factions, such as capturing a Warframe to complete his Zanuka Project. As a man with deep knowledge, he was able to evolve the Infestation further and eventually became the first man unassociated with the Tenno to control a Warframe, albeit at the cost of his own sanity—becoming the Infested himself.

After the events of The Hunt For Alad V, The Lotus discovered several Corpus ships that were traveling well outside usual shipping routes. These ships were heavily armored, and used several measures to keep themselves hidden from prying eyes. Suspicious about their purpose, Lotus sent the Tenno to investigate these ships and their mysterious cargo.

The Tenno discovered that many of these ships contained samples of Infested tissue, heavily guarded by Corpus platoons, though some of these ships have suffered containment breaches and have been overrun with the Infested. Alad contacts the Tenno during their investigations, explaining that he disagrees with the Corpus ban on Infested Biotechnology, and has decided to focus his resources on this forbidden line of research.

The Lotus learns that Alad's experiments have allowed the Infestation to evolve, allowing it to infect and corrupt inorganic beings. Lotus also discovered that Alad has also engineered Infested Hives as a means of directing the spread of the Infested, as these hives can quickly corrupt new ships or colonies almost immediately.

After hearing word of a massive Infestation outbreak near Eris, Lotus ordered the Tenno to intercept the Infested ships and destroy the hives in order to halt the outbreak, fearing that the newly evolved strain would quickly overrun the system if left unchecked.

Although the Tenno succeeded in stopping the outbreak, Alad sent out one last message that mocked the Tenno's efforts, claiming that their actions have left Alad with the hardiest, most vicious strains at his disposal.

With the evolved Infested at his disposal, Alad unveiled his plan to unleash a new "Mutalist Empire," infecting Tenno, Grineer, and Corpus alike in an attempt to unify and subordinate them. At this point The Lotus believes that the Infestation has corrupted Alad's mind, describing him as the Infested itself. From there, Mutalist Infestations would periodically surface across the Solar System, and the Tenno were tasked to purge them with the help of the Corpus and the Grineer. Through the valiant and combined effort of the three factions, the Mutalist Infestations were quickly pushed back into minimum, but ultimately failed to fully exterminate the new breeds and so remained a permanent threat to the system.

The Lotus also directed the Tenno to locate Alad and destroy his research labs. During their searches, Alad, now hybridized with Infested tissue, contacts the Tenno and reveals that he has another Warframe in his possession, and plans to infuse it with Infested tissue. The search continues, and as they have located his research labs, they encounter the Infested Warframe - the epitome of Alad V's Mutalist Infestation.

Despite Alad V's laboratory being destroyed, he expresses no grudge towards the Tenno and instead announces his disappointment at them, remarking that this was a chance for them to redeem their past mistake.

Alad V and Nef Anyo duel for the potential cure to Alad's Infestation, which is found within Tyl Regor's ocean labs. As Alad V describes, he wishes the Tenno to obtain Tyl Regor's research before sabotaging the lab to potentially find himself a cure of the plague, to purify his Infested self and to redeem himself of his mistake. Nef Anyo, however, sees his plea to the Lotus as a threat to his position in the Corpus board and immediately broadcasts his alternate proposition to pay the Tenno to destroy Tyl Regor's lab, wanting to prevent Alad V from obtaining the cure and regain power in the board. As both sides offers the locations of the underwater laboratoriums to do their willing, the Lotus refuses to sway the Tenno into a specific choice, and it is ultimately up to themselves to decide which of the two is the lesser evil.

Like the Mutalist Osprey, half of Alad is still his original self, but Infested mass has spread all over his other arm, leg, and body. No longer accompanied by his Zanuka, Alad V is forced to fend for himself with a

Toxin damage, bypassing shields. It is capable of applying a

Toxin proc, which will often deal high and fatal DoT to Tenno with low health not equipped with

Antitoxin, and can also apply a

Alad V is shrouded in a swarm of nanites, slightly damaging nearby Tenno if they are too close. 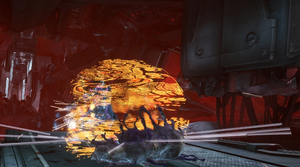 Alad V removes his collar and deploys it on the ground as a temporary cover to hide and shoot behind. Weapons with punch through can penetrate the barrier and damage Alad. Once he has taken enough damage, he will re-equip his collar.

While the Infested Barrier is active, it will periodically shoot out multiple projectiles that can deal and proc

If any Tenno wander too close to Alad V when he deploys the Infested Barrier or when the Barrier is active, the Barrier will explode in a burst of flame, knocking back and damaging anyone who is too close.

Alad V removes his collar and releases a continuous electrical beam that deals very high damage at a rapid rate. If his target is out of range or behind cover or Alad has taken enough damage, he will stop the attack and reequip his collar.

Alad V removes his collar and throws it similarly to a

Glaive at a random Tenno. However, the collar does not bounce across surfaces, and can track and follow fleeing Tenno. If the collar connects to a Tenno, it will be forced under Alad V's will, and will automatically attack allies. The controlled Tenno is marked by an orange link to Alad, and can be rescued by damaging Alad enough. If fighting Alad V alone, the collar will explode on impact, staggering the Tenno and depleting their shields. Shields will be depleted and the Tenno will be staggered even if Rhino's Iron Skin is active, although Iron Skin will remain untouched and will still protect Rhino's health.

This attack can be dodged by performing a sidespring at the last moment before the collar makes contact or through shooting at it mid-air. It can also be negated by a Nyx's first and third abilities. The collar will remain attached, however the affected Tenno will act as if it were an ordinary enemy under Nyx's influence. 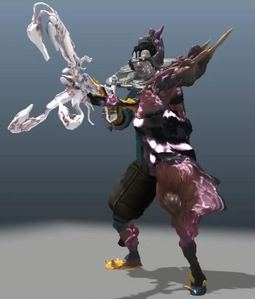 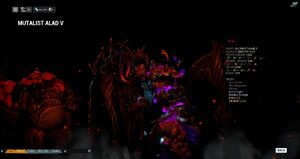 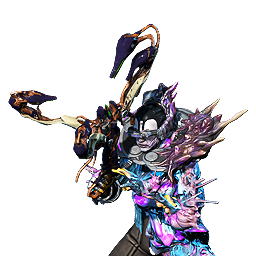 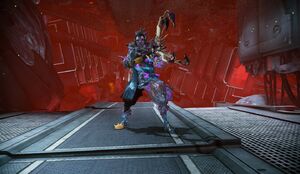 Mutalist Alad V during an in-game cutscene wielding his Paracyst. 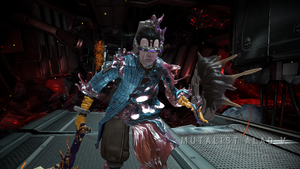 Mutalist Alad V as seen in the cut-scene before the battle begins. 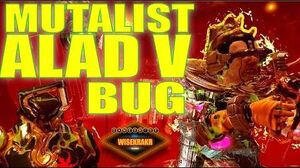 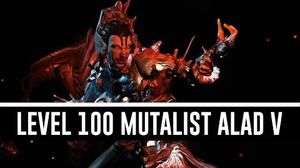 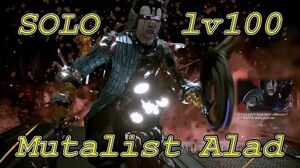