The Murex, formerly known as the Sentient Anomaly, is both a Sentient Tile Set and a Sentient warship introduced in Update 27.0 (2019-12-13) which acts as a Point of Interest and is encountered in Veil Proxima missions on Empyrean and Operation: Scarlet Spear. It is a Sentient troop transport ship notable for its alien interior and incredible size. Inside of it almost all existing Sentient units can be encountered.

Immunodes can occasionally spawn within the tileset, granting nearby Sentients temporary damage immunity.

These pods appear similar to the immunodes ones, and upon being approached by players will turn invisible releasing Vomvalysts.

In some tilesets, there is a floating Red Orb that slowly travels around and attacks players seemingly bypassing armor with

True damage. This orb can only be attacked by Operator Void Beam, but has no health bar and is therefore invincible. It also bypasses

Limbo's Rift Plane. However, going into Operator Void Mode does make the player immune to its attacks.

The entrance of these conduits will form when the player gets close to it, allowing to be entered by jumping inside. Doing so they will go through a high-speed transport conduit, bringing them to the next section of the map. They can be entered with indifferently from both sides.

Within the Murex certain walls can be destroyed with

Void damage, revealing small rooms with loot inside. Bug: clients can use any damage type to break the wall.

The Murex will occupy a Grineer-controlled node on the Veil for 30 minutes, indicated by a red flashing

Sentient symbol, after which it will rotate to a different node. The Murex will not appear in Void Storm missions.

While active, the Murex will constitute a mission objective in the Railjack mission (similar to a Pulse Turbine or Shipkiller Platform). Cephalon Cy will request that the Tenno investigate the Sentient presence in the area at the beginning of the mission. Once the Tenno enter the Murex, Cephalon Cy instructs them to "sterilize" it of Sentient life as a means to prevent Grineer exploitation. Once 20 Sentient enemies are destroyed, Cy deems the objective complete.

The Tile Set features high level Sentient enemies, and is the first area to house the Brachiolyst and Symbilyst. After killing 20 Sentient enemies in this Point of Interest, all players within the squad will receive an Anomaly Shard, which can be traded to Little Duck for the Tenebrous Ephemera and Sentient Ship Captura scenes.

Originally, destroying a red crystal within the Murex, which required the

Paracesis, would start the Erra Quest. This is no longer accurate and the Quest can be accessed directly from the Codex upon completion of the Chimera Prologue Quest.

The mission starts with the Railjack carrying an OpLink Satellite, which must be brought in front of the Murex. While carrying the satellite, the forward turrets are disabled, though Munitions may still be fired. Sentient Gyrix and Ionyx will attempt to destroy the satellite, along with Splintrix delivering boarding parties. The most notable of these troops is the Anu Mantalysts which will deposit Anu Interference Drones to disrupt the Railjack's systems, preventing the use of Tactical and Battle Avionics, and reduce its speed. Later in the mission, Grineer Exo fighters and crewships will spawn. Once the satellite has been delivered, it will become invulnerable and players no longer need to defend it.

The squad must then board the Murex and place their OpLinks, which will upload Kill Codes that are obtained and automatically transmitted by the Ground Assault teams. 9 Kill Codes are needed for Murex Raid players to successfully fend off a Murex ship. Sentient forces will come in waves to attempt to destroy the OpLinks.

Players may extract at any time by using the Railjack's navigation terminal. Up to a maximum of 5 Murex can be fended off in a single run. If the Satellite or all OpLinks are destroyed after fending off one Murex, players cannot continue uploading and are forced to extract. 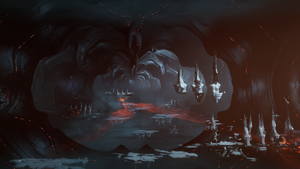 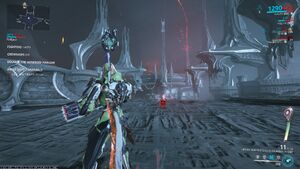 Gauss in the outdoor starting tile 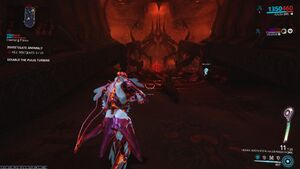 Little Duck is no stranger to Exotic goods - an Amp assembler and Toroid master, the strong and the strange are what she makes her business on. Her interest in Anomaly shards allows you to access new Exotic Goods: