Modules (version 2.0) or in short, Mods are essentially the upgrade system in WARFRAME in the form of special cards that can be equipped to Warframes, weapons, sentinels, Kubrows, and Archwings to enhance damage, power, survivability, speed, precepts, and utility. Mods can grant Passive Powers, Active Powers, Sentinel Precepts, and Utilities. Mods can be changed between items. There are around 1,039 mods existing in the game excluding Riven Mods. 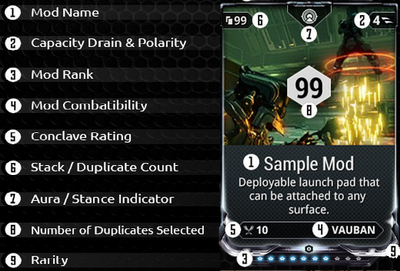 Mods have 9 attributes: (place on card)

Mods can only be attached to their indicated type of item. They may be generally applicable to weapons, Warframes, or companions (i.e. “Warframe Mod”) or specific to their respective class (i.e. “Trinity Mod”). The type is listed in the bottom right of the description of the mod.

Mods vary in 5 ranks of rarity as indicated by the border color and number of diamonds at the top.

Warframes, companions, and weapons have a limited capacity for Mods equal to their Rank (Max 30). Warframes/Companions and Weapons can be supercharged with an Orokin Reactor or Orokin Catalyst respectively, which doubles the available Mod capacity up to a max of 60. Mod Capacity functions as a limit to what mods can be equipped depending on their drain. Mods can have a drain of 0 to as high as 20 depending on the mod and what rank it is. Items also have a minimum mod capacity, which adds mod points onto items which are a lower rank than a players current Mastery Rank. The amount of minimum mod capacity is equal to the player's mastery rank.

The amount of mod slots an item will have depends on what type it is:

Aura mods for Warframes increase Mod Capacity rather than drain it. This can be from an additional 1 to 18 Mod Capacity. Stance mods for melee weapons do the same.

Cryo Rounds increased their mod drain to 11, up from 9, builds who had those mods equipped and had 0 remaining mod capacity will show a negative capacity, such as -1 as it flashes red. Players are allowed to keep these builds as is, but removing any of the mods will correct the issue and not allow the player to replace the mod again.

Some slots are “polarized.” Each type of Polarization has a unique associated symbol. Putting mods of the correct polarization into a polarized slot will lower the mod capacity used (rounded up) by 50%. Conversely equipping mods of the different polarization into a polarized slot will increase mod capacity drain by a quarter of the starting cost of mod, rounded mathematically.

Mods have levels ranging from 0 to as high as 10 (typically 3-5). When the level of a mod is greater than zero, it is indicated by blue dots on the bottom of the card.

Each rank requires twice the mod energy than the previous rank to level up and leveling up from rank 0 to 1 sets the base amount of mod energy for this calculation.
See Fusion.

Conclave Score was a special score once used for the Conclave. Used in matchmaking as a minimum score for joining them. The higher the score, the stronger the bosses. Previously, Tactical Alerts added a maximum amount of Conclave Score, often low, as a requirement for even making it more challenging.

As Conclave 2.0 was added, this feature became no longer used for Conclave.

Since Update: The Silver Grove an unlisted change removed Conclave Score from every equipment and mod.

Each Tenno's mod collection has an overall rating, which is visible in the upper-right corner of the Mod Collection screen. The mod score is directly correlated to how much Endo the mod will yield when dissolved.

Introduced in Update 12, mods of the same type and fusion level will combine into essentially a mod stack, with a number on the top left showing how many of that card is available. This process is essential in reducing clutter and is also used to ease the process of selling or dissolving mods.

When selling a mod, you can either select one or a stack, and click "Sell". This will sell the selected amount.

This stacking system also plays a role in Fusion. You can dissolve mods into Endo and use it to level up other mods. To dissolve select a mod or a stack of mods and click "Dissolve ".

To install mods on an item, drag a mod from the collection and drop it on a Mod slot. If the Mod Capacity drain is less or equal to the item’s remaining Mod Capacity it will install and Mod Capacity will be deducted. Drain can be modified by polarities:

To prevent exponential bonus stacking, players can't put duplicate mods in a single piece of equipment. For example, a given pistol can only have one

Hornet Strike mod in it at a time. However, a dual stat mod can be applied at the same time as a mod that gives one of its stats. For instance,

Primed Flow can't be both installed on a frame.

For mods increasing shield, health or power, bonuses are calculated from the Warframe's base value. This prevents exponential increases with the passive leveling bonuses introduced in Update 7.6.

Mods increasing damage or adding special damage types do not conflict with each other and may be stacked to increase the overall damage output. However each two elemental mods will be added up into a Combined Element, with different damage multipliers against certain enemies. For combined elements, the slots are ordered from left to right, top row then bottom row, with any inherent elemental damage (from the weapon) added last.

Mods can have their overall power increased by the process called Fusion. Fusing with a mod with Endo increases the rank and overall power of the mod.

Types of mods with special characteristics are listed below:

Aura Mods are Warframe mods that benefit the entire Cell and also increase the player's Warframe total mod capacity. They can only be equipped in the dedicated Aura slot and only one Aura can be equipped to a Warframe. They can normally be obtained from Alerts, but some drop from The Silver Grove specters and Nox.

Stance Mods are special mods for Melee Weapons. They increase the player's melee weapon mod capacity and unlock unique attack combos. They can only be equipped in the dedicated Stance slot for a specific weapon type and only one Stance can be equipped to a melee weapon.

Exilus Mods are utility or mobility based mods that can be equipped on any Warframe mod slots or the dedicated Exilus slot. The Exilus slot must be unlocked with an Exilus Adapter.

Nightmare Mode Mods are essentially mods with dual stats. They can be acquired through completing missions in Nightmare Mode.

Corrupted mods can be obtained from the Orokin Derelict, using special Dragon Keys to unlock vaults located within. These mods have dual stats, one being a bonus, the other being a negative side effect.

Augment Mods are Syndicate Offerings that provide augmentation to a specific Warframe or weapon.

Conclave Mods can be acquired from the Conclave Syndicate and can only be used during Conclave (PvP) matches.

Damaged mods are weaker versions of various normal mods that are automatically picked up during the course of the Vor's Prize quest missions.

Primed Mods are legendary versions of normal mods which increase the maximum mod rank to 10. They can normally be obtained from Baro Ki'Teer, but three primed mods,

Primed Shred are only obtained from 200/400/600 Daily Tributes respectively and cannot be traded with players.

Riven Mods are special weapon mods that can feature up to four random different stats, sometimes disadvantageous. A single Rifle Riven Mod is given to players upon completion of The War Within quest, and additional Riven Mods can be acquired as rewards from Sorties. When acquired, Riven Mods come in a veiled variant which supplies no stats and must have a challenge completed in order to unveil it. The only way to obtain unveiled Riven Mods directly is trading with players. All Riven Mods are unique to a specific weapon upon being unveiled, and therefore cannot be equipped to any other weapon.

Set Mods are weapon and Warframe mods which function like regular common to rare mods on their own but if the specific number of the set is equipped all at the same time, they grant an additional bonus set effect. They are distinguishable by their shared set prefix (Augur, Gladiator, Vigilante, Hunter) and icon on top of their card.