Your collection of mods is impressive, Operator... But, I wonder if there are more to be had?
—Ordis

Mods, short for Modifications[1] or Modules, are the upgrade system in WARFRAME in the form of special cards that can be equipped on Warframes, weapons, companions, and vehicles to enhance damage, power, survivability, speed, mobility, precepts, and utility.

The Mods system is accessible after the completion of "Liberate the imprisoned arms dealer" tutorial mission from the Vor's Prize Quest, by installing the Mods Segment reward from said mission onto the Orbiter, which will permanently unlock the Mods system for use via the Arsenal ("Upgrade").

From the Arsenal, you can install mods on your equipment, but they are limited by the equipment's mod capacity that depends on the level of the equipment. Any mod can be installed/removed freely and can be applied to several equipment at the same time. You can also upgrade your mods by using Endo Endo

Credits through the process of Fusion. 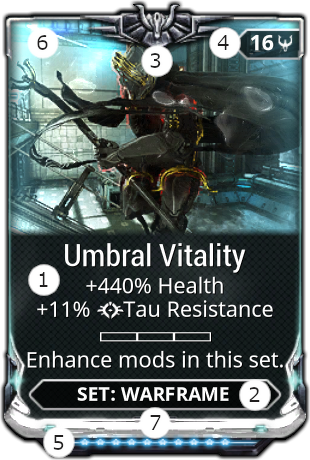 For mods of the lowest 4 tiers (Common-Legendary), their rarity defines both increasing with rarity applicable fusion costs and trading taxes (being highest for Legendary out of all mods in game), while the 5 highest tiers (Riven-Requiem) share these with Rare mods (except Peculiar - sharing with Uncommon instead).

Most mods of the lowest 5 tiers have an increasing number of pips at the top of their mod cards (except mods that are part of a Set - such as the image to the right - displaying the Set emblem in place of pips). In the order of increasing rarity these are:

Introduced in Update 12.0 (2014-02-05), mods of the same type and fusion level are placed into an item stack, with a number on the top left showing how many of that item is available. This process is essential in reducing clutter and is also used to ease the process of selling or dissolving mods.

Once the Mods system has been unlocked, mods can be installed by visiting the Arsenal on your Orbiter, selecting the desired Mod destination (e.g. Warframe, Weapon), and then clicking on the UPGRADE  button. Afterward either click on ACTIONS  > APPLY AUTO INSTALLATION , or simply drag a mod from the collection and drop it on a Mod slot. Mod installation and removal is instant and free.

The number and type of slots an item will have depends on the type of equipment:

Items have a limited Mod Capacity, that correlates to their Rank. The maximum rank is normally 30, but for some items it is 40. Warframes/Companions/Archwings/K-Drives/Necramechs and Weapons can be supercharged with an Orokin Reactor or Orokin Catalyst respectively, which doubles the available Mod capacity. Mod Capacity functions as a limit to what mods can be equipped depending on their drain. Mods can have a drain of 0 to as high as 20 depending on the mod and what rank it is. Items also have a minimum mod capacity, which adds mod points onto items that are a lower rank than a player's current Mastery Rank. The amount of minimum mod capacity is equal to the player's mastery rank.

Mod drain is modified by Polarity:

Aura and Stance mods increase Mod Capacity rather than drain it.

The Railjack analogue of the Arsenal is the Plexus, also located in the Orbiter, and accessible from a Dry Dock.

Mods can have their overall power increased by the process called Fusion. Fusing a mod with Endo increases the rank, and thereby overall power, of the mod. Each rank requires twice the mod energy than the previous rank to level up and leveling up from rank 0 to 1 sets the base amount of mod energy for this calculation.

Transmutation is one of the ways of acquiring mods. Choosing this Mod Action, players can sacrifice four selected unranked mods to generate a random mod from a list of mods that can be acquired in this way. Alternatively, three selected mods and one

Transmutation Core can be used to guarantee a random mod of a specific polarity. Transmutation of Riven Mods requires a Riven Transmuter. Mods that cannot be acquired by transmutation are conventionally called untransmutable mods.

Choosing this Mod Action, a player can convert a mod into an amount of Credits equal to 75% of the

Credits invested in the mod[2]. Any selection of single mods and/or stacks of mods can be sold, and players are prompted to review and confirm the action after clicking "Sell" (after a mod has been "sold" this way, it isn't physically found anywhere – it has been eliminated). Notably, Riven Mods cannot be sold.

View Selling Prices Per Mod in

Choosing this Mod Action, a player can convert a mod into a set amount of Endo, equal to it's Mod Rating. A sum of all owned mods' Mod Ratings is visible just above the mods in the Mods Console display. Riven mods have a special calculation (see the table below). Any selection of single mods and/or stacks of mods can be sold, and players are prompted to review and confirm the action after clicking "Dissolve".

For information on calculating bonuses from mods, see Calculating Bonuses.

Standard mods (or single-stat mods) are the basic class of mods: all the mods that provide a straightforward bonus to a single stat. In each item category, each base stat only corresponds to one standard mod. At times, changes to game mechanics have included total redesigns of some mods to become a different single-stat mod or dual-stat mods (e.g.

Quickening), but these are still essentially standard mods. Standard mods are generally equipped in one of the main slots, but some are Exilus mods.

A standard mod may come in six variants: Normal, Flawed, Primed, Umbra, Amalgam, and Galvanized. In addition to being eligible for these variants, standard mods may also have a unique variant.

Players cannot install duplicate mods onto a single piece of equipment. Likewise, different variants of the same mod cannot be equipped together. For example, a given pistol can only accept one

Hornet Strike mod at a time, and

Primed Flow can't be installed together on a Warframe.

Nonstandard mods are all the other mods that provide bonuses to either the same stats as the standard mods or to certain other stats, or modify equipment in specific ways. They come in different classes and have a more varied design. Nonstandard mods stack with other mods providing the same type of bonus (certain exceptions exist). Therefore,

Vigor (a Nightmare mod, providing both a Health and Shield bonus). They generally do not have variants (a small number of Primed Nightmare mods are one exception).

The following types of mods have a special, dedicated slot.

Mods that do not fit in the above categories: 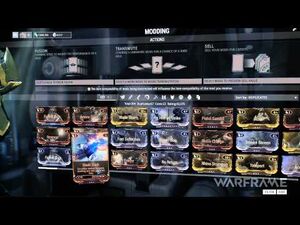 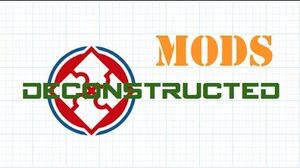