In Mobile missions, Tenno must find and defend multiple consoles while the Lotus hacks into enemy systems. A datamass will spawn, and the Tenno must carry it to one of the nearby targets.

Mobile Defense is a Mission type requiring players to carry a datamass to 2-3 computer terminals and upload it to them. Once uploaded at each terminal, players will have to defend the terminal until hacking is completed. Unlike normal Defense missions, these require players to defend for a set period of time instead of a set amount of waves, and will allow extraction once all terminals have been defended, no longer requiring the datamass. The mission will fail if a single terminal is destroyed.

Terminals possess a scaled amount of health and shields matching the level of the mission. If defended against damage, terminals will regenerate shields and health on their own after some time passes, stacking with

A standard Mobile Defense mission on most tilesets requires players to protect 3 data terminals in three different large rooms for 60-80 seconds per terminal, based on mission level, for a total defense time of 180-240 seconds. Variations on this formula are as follows:

All Mobile Defense missions reward up to 3000 objective affinity, based on mission level, upon successful defense of each objective. 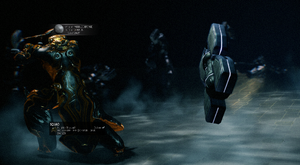 Mobile Defense (Corpus) as seen in the lobby (U9)

Mobile Defense (Grineer) as seen in the lobby (U9)

Mobile Defense (Infested) as seen in the lobby (U9)

In addition to these new mission types, Mobile Defense nodes are also available on the Zariman!

In Mobile Defense, you must restore the Zariman’s systems that were overcome by the Jump Incident, and defend them while your allies purge out the Void. For the Corpus and Grineer, it is key that the Zariman stay where it is. They will do everything in their power to prevent the Tenno from getting the Zariman’s full power back online. Alongside Corpus and Grineer enemies, a multiple Thrax enemy-types will come to assist in the fight.