The pursuit of mineralogy can make a person very happy indeed!
—Smokefinger

Mining is a non-combat activity that allows players to excavate various minerals and ores that are used as resources in Cetus, Fortuna, or the Necralisk. It can be performed in the Plains of Eidolon, the Orb Vallis, and the Cambion Drift.

Before players can begin mining, they must first acquire a Nosam Cutter from Old Man Suumbaat in Cetus for Ostron standing, or a Sunpoint Plasma Drill from Smokefinger in Fortuna for Solaris United standing. Players must then equip the mining tool in their Gear Wheel to use it.

The Sunpoint Plasma Drill is superior to the Nosam Cutters: it can mine Very Rare gems, includes the features of other Cutters, can be upgraded, and can be purchased earlier than most other Cutters as it does not require any Syndicate ranks. It also has the slowest drill progress, making precise timing easier. It does, however, require at least 2,500 Standing

2,500 standing with Solaris United to be able to purchase, which could involve multiple Bounty Missions.

Acquiring a Basic Nosam Cutter in Cetus for a much simpler 500 standing (low enough to be gained during Saya's Vigil) and mining Venus gems that can be traded in for Standing is a quick way to get the Sunpoint Plasma Drill. Keeping the Nosam Cutter after this process is recommended, since the Drill has a remarkably low chance of finding Common and Uncommon ores and gems. However, note that a Nosam Cutter and a Sunpoint Plasma Drill cannot be equipped at the same time.

Out on the Plains, Vallis, or Drift, players have several means of finding resource deposits.

Extraction is now done by heating a deposit to the ideal temperature. Aiming and shooting your Mining tool at any of the heat spots (flashing blue dots) on a deposit will begin the process.

A thermometer gauge ring will appear with boxed indicators that denote where you have to land in order to extract from the deposit. Simply hold the fire button and release when you are inside any of the indicators on the ring. Red deposits indicate Ores and Blue indicates Gems. Landing in the smaller of the indicators yields Gems (even on a Red deposit).
—Update 24.0 (2018-11-08) patch notes

Once the player has located a vein, they can begin mining it by equipping their Cutter, and then zooming in on the vein (default hold RMB ). This will reveal 1~3 blue drilling spots. You must aim onto a drilling spot, then press and hold the fire button (default LMB ) while remaining still. A ring of unlit colored lights with white brackets will appear. You can also press the Secondary Fire button after zooming in to adjust the magnification of the zoom (default MMB ).

The goal is to stop firing when the colored lights reach as close to the middle of these white brackets as possible. The brackets can sometimes be moving or changing in size, presenting a challenge in hitting the desired spot. Occasionally, these brackets can also be accompanied by a second, smaller set of special narrow brackets, which players can attempt to hit in lieu of the larger brackets for additional rewards.

A progress gauge will fill up at the top of the Cutter's HUD, composed of 5 small mineral icons determining the amount of resources gained and the quality of the deposit that was just mined, all affected by the timing of the cut. The mining is completed once the yellow gem bar fills up, which will reward a random mineral, either Ore or Gem depending on whether an Ore or Gem deposit was mined. Additionally, successfully hitting the special narrow brackets during mining will grant additional gem rewards on completion, even on ore veins.

The more accurate the timing during mining, the higher the likelihood a better-grade mineral will be mined, and the higher the amount of minerals will be given upon completion. Players can halt cutting at any time, however doing so will immediately "complete" the drilling spot that was cut into, preventing a retry of that spot, and thus reducing the quality and quantity of extracted minerals. This makes uninterrupted cutting most desirable, after clearing the immediate area of enemies.

The result of the mining is determined by different factors:

Cutters can be purchased from Old Man Suumbaat or Smokefinger for standing. More advanced Cutters feature more accurate mining beams, longer mineral detection ranges and Minimap mineral radar. While being able to cut all rarities of ore, only certain Cutters can mine rare gems. Regardless, all Cutters have a base beam range of 9 meters (without upgrades).

Widgets are upgrades that are permanently applied to only the Sunpoint Plasma Drill upon being purchased, enhancing their utility. There are two Widgets available and are both bought from Smokefinger for 30,000 Standing

30,000 at the rank of Old Mate. Both Widgets can be applied simultaneously.

Ores can be mined from red veins in Plains of Eidolon/Orb Vallis and yellow veins in Cambion Drift. Raw Ores can be refined and combined with other Resources in the Foundry to form materials suitable for construction. Unlike Gems, Ores cannot be turned in for standing to their local vendors (with the exception of Cambion Drift's Otak for Otak Tokens), and cannot be traded to other players.

However, once refined, they can no longer be turned for Standing. 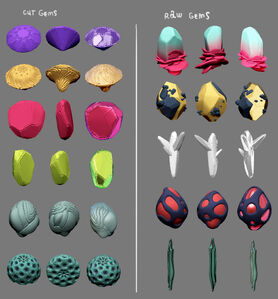 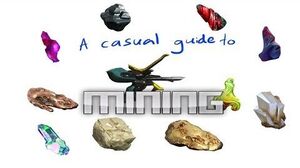 A concise guide to mining- Ores, gems and locations 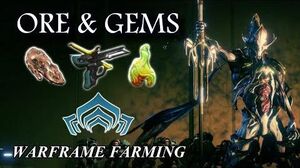 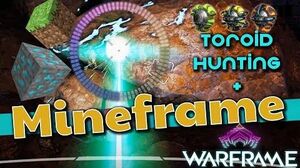 Meet 'Smokefinger', the Orb Vallis mineralogy enthusiast. This Fortuna vendor is your one-stop shop for the mining tools and resources you need! Speak with him in Fortuna to purchase the SUNPOINT PLASMA DRILL a fast-ignition, high-intensity mining tool capable of extracting the rarest of materials with surgical precision, and get to mining the Ores and Gems of The Orb Vallis:

Note: Ostron Mining Tools can be used out in The Orb Vallis to mine Gems/Ore, but the Sunpoint Plasma Drill is required to mine the rarest Gems in Vallis.

Mining launched with Update 22: Plains of Eidolon and introduced a new resource extracting system to Warframe! Collecting Ore and Gems required you trace a pattern around a deposit using a Mining cutter tool in order to release it from its encasement. Since then it has seen several small iterations over time in order to ease what was at times tricky to execute, especially since the quality of the deposit was affected by the accuracy of the trace (which typically made the process very slow).

With the introduction of a brand new open landscape with deposits of its own, we knew that we needed to add new challenge that required similar levels of precision and skill, but in a speedier fashion and with much more return. So with that said, we have made the following changes to Mining:

Extraction is now done by heating a deposit to the ideal temperature. Aiming and shooting your Mining tool at any of the heat spots (flashing blue dots) on a deposit will begin the process.

A thermometer gauge ring will appear with boxed indicators that denote where you have to land in order to extract from the deposit. Simply hold the fire button and release when you are inside any of the indicators on the ring. Red deposits still indicate Ores and Blue indicates Gems. Landing in the smaller of the indicators yields Gems (even on a Red deposit).

Update 22.11 (2018-01-31)
Mining Additions & Changes: We want you to feel like the perfect Gem that you are, and that means giving Mining a bit of a revisit! Feedback about difficulty level and perfect extraction recognition are just a few of the concerns we acted on and tweaked for the better.

Hotfix 22.10.2 (2018-01-26)
Mining Buff:
For those of you who may not have been aware, mining in the Plains has a base chance, as well as a bonus based on your accuracy, to reward a rare gem. We’ve increased both the base chance as well as the bonus for accuracy. You can tell how accurate you are by the number of gem icons that you fill up while mining. Each filled gem icon increases the total chance to receive a rare gem.