This sentient ambushes opponents by taking the form of mundane objects.

An old design! Mimics! Sentient Mimics! These haven't been seen since the Old War...

—Ordis, talking about Mimics in The Sacrifice

Mimics are Sentient units which are first encountered in The Sacrifice quest and can later be found on the Murex which occasionally appears in Veil Proxima. They take the form of normal environmental objects to catch enemies off guard.

As a Sentient, Mimics have the ability to adapt up to 4 damage types from attacks: a Sentient's health is gated such that upon its hit points falling below a fixed percentage, it will grant resistance to the damage type it has received the most. The Sentient will adapt to damage once per health gate, at the percentages listed below:

Subsequent adaptation will be done in descending order of damage proportion for each health gate. A single Sentient can adapt against a maximum of 4 damage types even if another Sentient transfers their adaptation, and Sentients will still receive full damage from any damage that exceeds their health gate before adapting.

On adapting to a damage type, the color of the glowing core on their chest changes to the corresponding damage type they recently adapted to, along with displaying the icon of said damage type below their health gauge.

The adaptation decreases in effectiveness the more damage types it resists.

Shedu's pulse on expending all ammo will remove all their damage resistances. They can still regain their resistances, however, the aforementioned abilities and weapons will always be able to remove them.

The Mimics also receive another 40% resistance to the damage type at each adaptation, which stacks multiplicatively with the previously listed ones. These resistances cannot be removed by any of the methods listed above.

The damage gating also prevents Mimics from being killed in one shot, as the maximum percentage of health removable in one instance is:

For this reason it is highly recommended to use weapons with multishot to multiply the instances of damage dealt per shot like shotguns, weapons equipped with Split Chamber or Barrel Diffusion, or weapons with high fire rate. 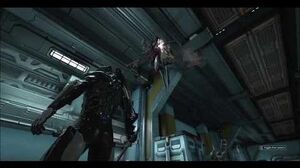 Mimic Enemy Demonstration No Commentary, No Intro
Add a photo to this gallery

Retrieved from "https://warframe.fandom.com/wiki/Mimic?oldid=2176092"
Community content is available under CC-BY-SA unless otherwise noted.