Melee can be switched to at any time by pressing the melee attack key (default E ), and can instantly switch back to an equipped primary or secondary weapon with the fire button (default LMB ) or zoom (default RMB ). Going into melee mode (default holding F ) will unlock additional melee combat features such as manual Blocking.

Each melee weapon has a number of attributes, such as attack speed and damage. Each attribute can be altered by a variety of Melee Mods.

The simplest form of melee attack. The action is achieved by simply pressing the melee attack key repeatedly, in which the animation pattern continues to loop until the player ceases the attack.

Also known as a Spin Attack, Slide Attacks propels a Warframe forward while performing a spinning slash around them, dealing greater damage and hitting multiple enemies. For sparring weapons like the

Obex, slide attacks perform a double kick that targets only a single enemy, but ragdolls them away instead of only dealing damage. Slide Attacks can be performed on the ground to hit low-lying enemies, or in the air to hit tall enemies, potentially landing headshots.

Slide attack damage can be increased by the

Pressure Point mod and all other elemental damage the player may have equipped on their weapon (e.g.

Press the melee attack button while in mid-air to perform an aerial attack, or rapidly press to perform an aerial attack combo, regardless if a jump has already been made or not. The Warframe will automatically maintain Aim Glide for the rest of the air combo if Aim Glide was initiated at the time of starting the combo. This is useful for fighting airborne targets such as Ospreys.

Also known as a Leap or Jump Attack. While in mid-air, performing a melee attack while aiming downwards will force the Warframe to slam down at the point of the reticle, dealing radial damage and applying a Status Effect to surrounding enemies, such as stagger, knockdown, lift or elemental procs. Players can also utilize slam attacks to change direction or add momentum while in mid-air, effectively zip-lining themselves to the point of the reticle.

There are two damage instances dealt by slam attacks:

While wall-latching a player may initiate a melee attack, causing the frame to drop off the wall facing the direction aimed, with a special melee attack animation. The attack will change depending on what melee weapon is used; most weapons will slash the air in front of them as they unlatch off the wall, while heavy weapons will swing the weapon around them, and sparring weapons will deal a forward punch.

Since Update 26.0, Wall Attack damage stat is not shown in the Arsenal.

Upon equipping a Stance Mod, up to three additional advanced Melee Combos will be unlocked, which are special chained attacks that enhance the melee abilities of the weapon. These combos can only be performed while wielding a melee weapon. The combination will vary depending on the melee weapon equipped and the Stance mod equipped.

Blocking is a defensive technique that negates both incoming damage and knockbacks in an angle in front of the Warframe.

Successful blocking can only be performed if enemies attack within the blocking angle cone of the player's melee weapon, which varies depending on the melee weapon type. For example, Dual Swords have a blocking angle of 60°, meaning any damage coming from 30° to the left or right of the reticle will be negated.

All melee weapons block 100% of incoming damage, with the exception of certain boss attacks and area-of-effect damage such as Bombard rockets, where blocking is only partially effective.

Any time an attack is successfully blocked, 1 point will be added to the Combo Counter. Additionally, blocking an enemy melee attack has a chance to stagger them, briefly opening them up to melee front/back finishers. This stagger chance can be increased through mods like

A tactical dodge or roll can be performed by rolling while blocking, allowing the player to shorten their roll distance while maintaining melee distance with enemies in combat.

Each successful consecutive melee hit against enemies within a short period of time will start a combo counter that appears above the weapon UI, which tracks how many hits have been performed or how many instances of damage have been blocked. Once a certain number of consecutive hits or successful blocks have been made, a damage multiplier will be displayed. This multiplier does not increase normal melee attack damage, it only applies to Heavy Attacks and partially towards certain melee based Warframe abilities.

Swift Momentum (used on yourself) and 3x

Amalgam Furax Body Count. Further increases are only possible with Riven Mods. The only weapon with infinite combo duration is the​ Xoris​, which is a glaive acquired during The Deadlock Protocol quest.

With the Power Spike passive from the Naramon School, the Melee Combo Counter decays by 20 / 15 / 10 / 5 every reset, instead of depleting completely. Whenever the counter goes below a multiplier threshold, it decreases the multiplier to the new value. At max rank without combo counter duration mods, it takes 220 seconds, or 44 reset ticks, to fully deplete. Combo duration mods greatly increase this time, as they apply to every reset tick. Replenishing the counter works the same as without the passive.

Venka Prime has a passive ability that allows it to reach 240 consecutive hits though, making it the only weapon capable of a 13.0x multiplier.

The table below displays the values up to a damage multiplier of 13.0x.

When the combo counter reaches 2x, Prime Armor Channeling special effects will appear as per prior to the removal of Channeling.

Tapping the MMB  or holding the attack button while melee is equipped will perform a Heavy Attack. Weapons have varying Wind-up times between activating a heavy attack and the actual attack being performed. For example,

Reflex Coil 10% of the combo counter will still be consumed upon a heavy attack. When modded for positive melee combo efficiency, performing heavy attacks without hitting any enemies will reset your combo duration, allowing players to keep their combo indefinitely, albeit losing some combo in the process. The Focus School

When tapping the MMB  in mid-air, a Heavy Slam Attack is executed. The heavy slam does not have any wind-up time nor does its radial attack have any damage falloff.

Heavy attacks and heavy slam attacks use fixed base damage multipliers compared to normal attacks. These multipliers depend on the weapon type. Furthermore, the radial damage of heavy slams uses another multiplier. This can be seen by comparing the values shown under the Heavy Attack section in the Arsenal to the total normal attack damage. The following table lists the possible values.

On top of the fixed multiplier, the damage is further multiplied by the current combo multiplier. For example, a heavy attack with a Staff with normal (modded) attack damage of 400, when at a 3x combo multiplier, will deal 400 × 5 × 3 = 6,000 damage on hit, in exchange for the combo counter being reduced down to zero (if no Melee Combo Efficiency mods are equipped).

Depending on the type of melee weapon, both light attacks and especially heavy attacks can deal different effects to enemies, such as applying Knockdown, Ragdoll, Stagger, or Lifted status. Surviving enemies that are struck by heavy attacks from Heavy Blades for example, will have a guaranteed Lifted proc applied to them. However, not all melee weapons grant Lifted status on heavy attack hits.

Lifted status suspends enemies in mid-air in a ragdolled state for a short period of time, allowing players to briefly "juggle" them in a melee combo. Besides heavy attacks, Lifted status can also be applied to enemies by performing Heavy Slam Attacks with nearly any melee weapon, lifting all enemies within that weapon's ground slam radius. The higher the combo multiplier at the time of a heavy attack or heavy slam attack, the longer enemies can stay suspended. Unlike standard status effects however, status duration bonuses do not extend the lifted duration.

Each melee weapon has a Follow Through statistic associated with it that tells what proportion of damage is dealt to successive targets in a single strike. In general, if a single strike hits multiple targets, the amount of damage each target will receive will be:

Where n is the order of when an enemy is hit, and FT is the amount of follow-through for the weapon.

As of Update 26.0, this stat is shown in the arsenal whereas previously it was hidden despite it existing before.

Finisher attacks have custom animations and deal a very high percentage of the equipped melee weapon's total damage. Players performing finishers are immune to any kind of damage for the duration of the animation.

The three types of finishers are: 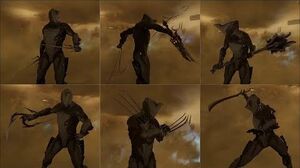 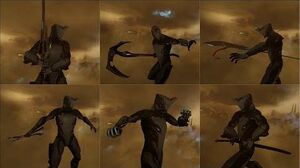 While most of our previous Hotfixes have focused on base functionality and bug fixes of Melee: Phase 2, this Hotfix takes a stab at some balancing in the wake of all the changes. This Hotfix also adjusts some Stances based on feedback.

The Critical Chance game has largely allowed Blood Rush to shine for active melee players, and with the ‘Steel’ series of Mods applying at the Base Critical Chance level, it’s led to players feeling they are obsolete. We are significantly buffing these Mods to give players a different option for Critical Chance builds. We want to give a more upfront Critical Chance and hard-hitting Heavy Attacks to builds that don’t rely on maintaining a high combo multiplier.

Melee has evolved again with a focus on TECHNIQUE - Stance/Combo reworks, the return of Equipped Melee, and MUCH more.

1. The Return of Equipped Melee and Manual Blocking!

3. Stance Changes, Combos and You!

Tenno - your favorite melee weapon probably feels a little different today. Today we bring you Phase 1 of 2019’s melee upgrade - we hope you love all the gorgeous new visual effects, streamlined combat, and high fidelity hit reactions! Here's what you can expect:

Swap between your gun and melee at the press of a button, no holstering required! Combos can be executed and resumed between movement and more. Blocking is now automatic in melee mode when aiming at an attacking enemy. Your stance combos may have changed, check out the Stance interface!

A Tenno is a master of aerial tactics - now you can better target enemies on the ground with deadly and responsive aimed ground slams.

Fundamentally, we aim to upgrade Melee. This is Phase 1.

No one knows the power of their Arsenal better than the Tenno - your adaptability and skill with the blade will be tested, and as we continue these changes, we rely on your feedback!

Our Mainline update notes will summarize the information from within the Workshop, plus denote additional information

All melee weapons have had their ground-slam ranges increased and new FX added:

A full Visual FX pass has been done for Phase 1! Because this is Phase 1, it 'means all the unique weapons will have new generic FX for a little while (Jat Kittag etc.) until we can get through them all and make new clean variants'.

New and cleaner FX have been created with the idea of beautifully short, highly detailed lifespans. Not infinite - meaning the 'Constant Weapon Trail' option will be removed as a result of this change (at least for Phase 1, we really do think it looks better removed).