Sentinel will occasionally heal its owner, restoring 12% Health over 4s.

https://www.warframe.com/droptables
Medi-Ray is a Sentinel and MOA precept mod that allows either to periodically restore a percentage of its owner's health over 4 seconds. 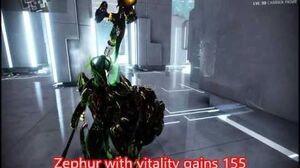