Mastery is an in-game method of tracking a player's relative skill level and how much of the game's content they have experienced. Mastery points are earned by leveling up unique weapons and warframes, the successful completition of uncompleted mission nodes. Weapons and warframes are leveled up with Affinity.

Mastery ranks unlock level capped weapons and warframes and raise the amount of times a player can trade per day. You will also be able to deploy more Extractors at higher levels.

In-game, players can view their profile and statistics (Go to the main menu and select "Show Profile" at the top left of the screen) and take a closer look at their mastery progression.

In order to be promoted to the next mastery rank, a player must pass a test which differs from rank to rank with difficulty increasing with Mastery Rank. If the test is failed, the Tenno will not be able to try again for 24 hours.

Tenno will enter the test equipped with whatever equipment is currently active in the arsenal. A Tenno cannot be in a party when qualifying itself, meaning they must complete the trial solo.

Powers can be used normally, so it is recommended to bring Team Energy Restores to keep a supply of energy on demand to ease the completion of the test.

Do not take sentinels with weapons to weapon-specific tests as they can fail you (e.g. Sidearm Test, Melee Test).

The table below shows the test players will take to get to the next rank. For example, passing the test on the Level 1 tab will advance you to Rank 1/Initiate.

Exterminate Test
This test requires players to exterminate three waves of enemies with their primary weapon until the test ends.

Sidearm Test
This test requires players to eliminate three waves of enemies with their equipped sidearm until the test ends.

Melee Test
This test requires players to eliminate three waves of enemies with their equipped melee until the test ends.

The player start in the center of a room encircled by six pillars. From here they must eliminate 5, 7 and 9 enemies within 0:45, 1:00 and 1:15 for each wave respectively.

Survival Test
This test requires players to survive an unlimited onslaught of Infested for a given period of time.

The player starts in the center of a room encircled by six pillars. From here they must survive for 1:30.

Terminal Hacking Test
This test requires players to hack two waves of consoles within a time limit of 1:45.

The player starts in the center encircled by terminals. From here they must hack three standard terminals and three complex terminals to pass the test.

The player starts the test standing on a brightly lit circular platform in a dark room encircled with metallic spheres. The player's camera will be turned toward the first target at the beginning of each round. Upon shooting the first target, lines will connect unlit spheres in succession before stopping at another target, this process will repeat itself until the test has ended.

Exterminate Test
This test requires players to eliminate three waves of enemies within 1:00.

The player start in the center of a white room with pillars circling the center. Grineer, Corpus, and Infested units will spawn in waves and must be dispatched of before time ends.

Wall Run Test
This test requires players to wall run while shooting white orbs which spawn the next path needed to reach a platform within three tries. Each fall from the tileset counts as a try.

The player starts on a single platform with a short downward ramp. Shooting the white orb will spawn more paths. Players will have to perform a horizontal wall run and proceed to shoot another white orb, spawning another wall to the right. Perform another horizontal wall run on it and a third white orb will appear. Shooting this will spawn a vertical wall. Players will now have to do a vertical wall run on this wall and bounce backward onto another platform. Repeat this two more times and you have completed the mission.

Stealth Test
This test requires players to make use of cover and enemy movements in order to assassinate targets without detection using melee only within three tries. Alerting the enemies will count as a try.

The player start in a grey or orange room equipped with only their melee weapon. Players make their way through three stages with increasing numbers of enemies and increasingly complexity patrol routes. Successful elimination of all enemies in a stage will unlock the next.

Disappearing Platform Test
This test requires players to eliminate targets at range, while maneuvering on platforms in a 3x3 grid that will permanently disappear after a few seconds of standing on them.

The player will spawn in on a round platform and the test will begin once you enter the grid area. You must kill all enemies spawning periodically atop five elevated platforms which line the far end of the grid. Once the player steps on a platform it will begin flashing increasing in speed until it disappears 8 seconds later.

Players have three chances to complete the test. Falling from the tileset counts as a try.

Time Trial Test
This test requires players to make their way through an obstacle course while shooting reactor orbs to increase the amount of time they have to finish the course. Reactors orbs add 3.5 seconds of time.

Carousel Test
This test requires players to eliminate enemies while being aware of their surroundings.

Players start on a platform facing a carousel-like structure with two disks connected with a large pillar at their centers. Between the disks are a set of lasers which separate the quadrants of the disks and slowly rotate around the disks, essentially circling the "carousel".

The object of the test is to reach the carousel, eliminate the enemies spawning on the outer disk, all while avoiding the moving lasers.

Players start facing a number of platforms surrounded by walls which can be run across. Once the player touches a platform, it begins to flash increasingly rapidly and will disappear after a few seconds. The platforms are arranged with one in each corner, and three stacked vertically in the center.

Players have three tries to eliminate all enemies on surrounding platforms. Each fall counts as a try and returns all previously exhausted platforms.

The player starts on the first level of a tower with multiple cover points and must eliminate targets until they are warped to the next level. There are three waves with Grineer, Infested, and Corpus units respectively.

View Mastery Rank List▾▾
Experience needed for each level is calculated by the formula: 2,500 * (Rank²)

Below are the ways a Tenno can gain Mastery Points:

Each individual item (such as a weapon or warframe) only grants its Mastery XP once per level. For instance:  leveling an item to max level, selling it, then leveling it again will not result in additional Mastery. Releveling an item after Polarization results in the same situation.  However, if an item is sold, rebought, then leveled to max, Mastery XP will be gained for all levels achieved beyond the original level.  Excess mastery points are not wasted if a Tenno failed a test, the excess points will automatically fill the mastery bar once passing the test.

The Mastery system indicates a player's overall progression through the game, and each rank comes with its own benefits. Below is a table noting such benefits. 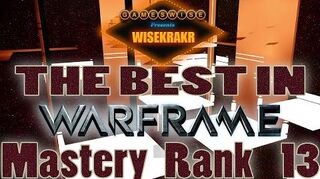 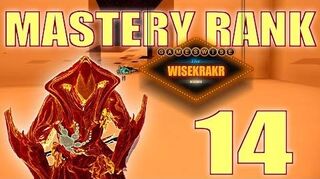 Retrieved from "https://warframe.fandom.com/wiki/Mastery_Rank?oldid=841240"
Community content is available under CC-BY-SA unless otherwise noted.