A primitive and devout civilization was carved into the dust-filled canyons of Mars. These aging and severely eroded habitations miraculously remain intact, regardless of how much Grineer machinery has been fastened to it. Rusty metal and oil-soaked sand mark the territory of its new proprietors.

The Grineer have reclaimed the abandoned dwellings of an ancient society which sprung up around a massive Orokin terraforming device. Content to make use of existing structures, Mars' current occupants have established a base of military operations in one of the few regions that has a habitable climate moderated by Orokin technology.

Mars is a planet under Grineer control, with skirmishes and several Crossfire missions with the Corpus.

Since Update: Plains of Eidolon, Maroo's Bazaar was relocated from Earth to Mars. 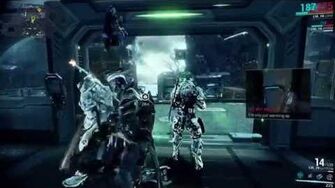