WARFRAME Wiki
Register
Don't have an account?
Sign In
Advertisement
in: Enemies, Enemies With No Drops, Lore,
and 3 more
English

What? Where's my damn treasure. I was told there would be treasure.

Maroo is a thief who helps the Tenno and the Lotus uncover the Arcane Codices after being hunted by her former employers, the Grineer, during the Stolen Dreams quest. As a thief, her interests lay in anything that helps her in the pursuit of money and riches. She runs her own relay on Mars, exclusively for Trading with other players and to access her Weekly Ayatan Treasure Hunt.

Maroo's loyalties lie only to herself or to the highest bidder, as she was first shown working for the Grineer in recovering the Arcane Codices, only to betray them and sell them to the Corpus instead. She has very little respect for either the Lotus or the Tenno, condescendingly referring to the latter as "Tin Suits". She has a considerable level of skill, as she was able to locate and recover the Codices (located deep in an Orokin Derelict) without serious injury (where several Grineer troops have failed and/or perished trying to do so) and was capable of initiating conflict between the Grineer and the Corpus stationed on Mars, with the intent of stealing anything of value amidst the confusion.

Maroo was initially contracted by Tyl Regor to find the Arcane Codices, only to sell the last three pieces of the Codices to the Corpus and subsequently go into hiding. Curious as to what the Codices contain, the Lotus sends the Tenno to a Corpus outpost on Europa to subdue her. Under the Tenno's custody Maroo initially refuses to reveal where the last Codex fragments are located, but when the Lotus threatens to hand her back to Regor, Maroo quickly points the location where the Codices are stored. As the Tenno infiltrate the Corpus' data vaults, Ordis theorizes that the Arcane Codex could lead to an Orokin treasure, much to Maroo's delight.

Once the Tenno collect all five of the Arcane Codices, Ordis explains that any machine that could read the Codex has probably degraded beyond use, only for Maroo to disclose that she extracted the Codices from an Arcane Machine within an Orokin Derelict. Theorizing that the Machine could read the combined Codex, the Tenno head out to Mars (which has a portal leading to said Derelict) to access the Arcane Machine. Once they insert the Arcane Codex however, the Machine broadcasts a cryptic message before vanishing without a trace. Disappointed that nothing of value was found, Maroo parts ways with the Tenno.

In the midst of unrest between the Grineer and the Corpus, the Lotus intercepts a bizarre distress signal broadcasted from Mars, and traces it to a prison located on Ceres. The Tenno head to Ceres to free the unknown prisoner, who ultimately turns out to be Maroo. She explains that she initiated the very conflict being waged between the Corpus and the Grineer, in the hopes of stealing items of value unnoticed. Unfortunately, the chaos attracted the attention of the Grineer's elite Nightwatch Corps, who subsequently ended up discovering Maroo and capturing her. Thanking the Tenno for the rescue, she points them to a location to thin out the Corps' numbers and ultimately drive them off.

After the completion of Stolen Dreams quest, the player will be able to run a weekly Ayatan Treasure Hunt with Maroo. This mission works similar to the occasional, parkour-oriented challenge rooms found in either Orokin Void or Orokin Derelict's treasure room. Only this time, completing said treasure hunt is the primary objective of the mission.

The reward for completing the challenge room (and in extension the mission) is an Ayatan Sculpture that alternates each week, following a pre-determined sequence (which doesn't include Anasa, Hemakara, Kitah or Zambuka). The mission can be completed once per week, resetting every Monday.

These treasure runs are a good deal easier if you have completed The War Within, so you can use the Void Dash of your Operator. 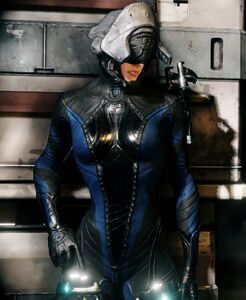 Maroo as seen in the Stolen Dreams panorama.