Machete Wraith
Prisma Machete
CODEX
A ferocious melee weapon crafted by the Grineer and carried by their elite melee forces.

The Machete is a

The Machete's blueprint can be bought from Cephalon Simaris offerings for 100,000 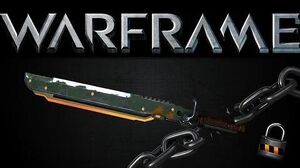 Retrieved from "https://warframe.fandom.com/wiki/Machete?oldid=2184190"
Community content is available under CC-BY-SA unless otherwise noted.