The Ludoplex is an Orbiter decoration that allows players to play Warframe-themed minigames. It comes pre-installed with the Frame Fighter minigame.

The Ludoplex can be bought from Cephalon Simaris for 50,000 Standing 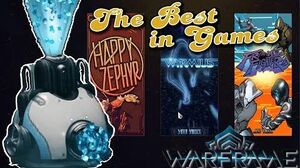 TAKING A BREAK FROM WARFRAME - Ludoplex