Functioning agents of the Infestation appear in a variety of horrific forms. While some infested organisms take the relative shape and physical properties of a newly acquired host, older entities have taken unique and transformative shapes of their own, adapting to their environment over time, and absorbing new victims to feed their evolution.

Deep within this millennia old Orokin-turned Infested ship lurks a creature created to fight in the Old War.

Lephantis is a massive, multi-headed Infested boss created to fight in the Old War, introduced in Update 10.0 (2013-09-13). This large amalgamated creature consists of three heads called Infested Corpus, Infested Grineer, and Ancient Infested, which can seemingly extend and are attached to a tripod-like body hidden beneath the ground.

It is found on Magnacidium, Deimos. After defeating it and finishing the mission, the player will receive a

Nekros component blueprint. Each of its heads are also capable of dropping Neurodes and Orokin Cells in addition to its main body, potentially totaling up to four resource drops.

Throughout Phase 1, each of Lephantis' three heads will emerge of the ground before attacking, which causes knockdown to any nearby Tenno. In Phase 2, its main body can create shockwaves that knockdown.

The Infested Corpus head resembles a severely mutated Corpus helmet with a mouth taking up its entire face, with a set of tentacles on either side that cover it up when not attacking. It can spit deadly poison grenades at great distances, leaving behind

Toxin clouds that deal high damage and ignore shields. It can also release Infested spawn pods similar to those dropped by Boilers which will spawn multiple basic Infested units over time until it is either destroyed or expires on its own, leaving behind a cloud of poison.
The Infested Grineer head has a three-pronged jaw and wields a massive organic scythe-arm. It will either swing its scythe in a wide horizontal sweep or downward with an overhead strike. The scythe is capable of destroying obstacles in the arena as well as inflicting knockdowns with every hit. Its face is located below the jaw, which appears to be the Grineer that was merged into Lephantis long ago; it will only reveal itself when it attacks.
The Ancient Infested head sports a long, stout jaw as well as the "crown" that normal Ancients have on their backs. It will spit an arc of Spore Bombs that explode a second after hitting the ground. While the bombs have a wide radius and deal a high amount of damage, they do not ignore shields.

During phase 1, each of Lephantis's heads possesses an innate 60% DR. During phase 2, this is increased to 70% DR.

Lephantis also possesses Damage Reduction that scales depending on your weapon's damage. Damage is calculated by

Additionally, the damage is calculated using all health damage type modifiers, and is quantized. Critical hits have their damage doubled on top of the weapon's critical multiplier.

If a head is hit again within approximately 0.27 seconds, whether from multishot or simply firing again, the hit uses the following modifier instead:

In addition, during Phase 2, each head possesses a damage cap. The cap is calculated for each damage instance, not the sum of hits. 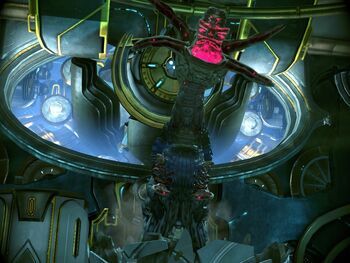 Throughout the fight, each of Lephantis's heads will emerge from the ground in intervals and attack, allowing players to hit them. They are all completely immune to damage except on their pink weak spots, which are only revealed when they attack: the Corpus head's weak spot is its mouth, the Ancient head's weak spot is its neck, and the Grineer head has two weak spots - the mouth and the "face", with the latter taking 2x damage.

The fight begins with the Infested Corpus head appearing first, and the Ancient Infested head following soon after. When enough combined damage has been dealt to the Corpus and Ancient heads, they will temporarily retreat and the Grineer head will emerge alone. After the Grineer head retreats, all three heads will be able to emerge and attack together.

Once all three heads have been defeated, the ground will rumble and all three heads will emerge at once, destroying the entire floor. Players will fall down into the ruins below, where the body of Lephantis resides. This area is darker and has small pools of electrified water, which cause players to take

Electricity damage when stepping in them.

Phase 2 is much the same as Phase 1, except all three heads are present at the same time and they cannot retreat, attached to its main body which stomps around and rotates in its arena. Once a head is defeated, it will explode and leave behind a stump on Lephantis' body that will periodically spit out Spore Grenades.

Once all heads have been destroyed, the body of Lephantis will collapse and explode.