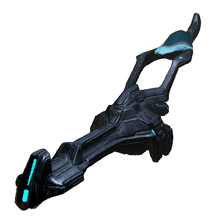 Loose an incendiary attack that damages over time

The Lega Prism is an Amp component, available as a single-use blueprint from Little Duck. It alters the Operator's Void Beam to fire a widespread jet of void fire, similar to a flamethrower.

‍3,000 standing and requires a rank of Hand to purchase. It is also a possible rank-up reward for advancing to ​Hand​ with Vox Solaris.

Retrieved from "https://warframe.fandom.com/wiki/Lega_Prism?oldid=2163513"
Community content is available under CC-BY-SA unless otherwise noted.