Leapers are Infested Corpus Crewmen with glowing blue nodes that try to tackle players from a distance; they will signal this action by stopping a small distance from a player and performing a battle cry. While not difficult to avoid, failing to do so will knock a player down for a few seconds. Leapers will take significantly more damage (ten times the normal amount) while pouncing. After pouncing, or if players go outside their leaping range, they will run towards nearby players and swipe at them; these swipes are incapable of stunning players, but are extremely fast. They can also choose to throw globs of Infested mass at the player, provided they cannot reach the player by normal means.

Leapers are the second most dangerous of the Light Infested to Defense objectives as they will use their quick swiping attack when nearby. However, they are the least common of the light Infested (and will hesitate when they come within leaping range of the cryopod only to run the rest of the way instead, making them easier to shoot) on these missions but should still be taken out as soon as possible.

Visually, a Leaper is one of the least disfigured of the Infested types, alongside Runners and their volatile variant, with most of the Crewman's form still intact as well as most of their suit. However, one leg has dissolved completely and replaced with an Infested stump, as well a missing finger on the left hand. Most notably, however, is the right arm that was attached to the head and then fused to the body by an overgrowth of Infested mass, with a tentacle acting as its replacement. When unalerted, the leaper will occasionally use its still intact arm to grab the infested mass, almost as if mimicking the unlucky host's last moments as they tried to resist the transformation. 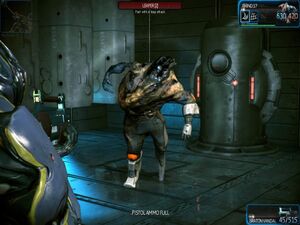 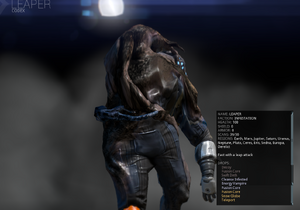