Energy and Universal Orbs give Lavos status immunity for 10s.

Hold any ability to imbue the next cast with additional Elemental Damage and Status.

Manipulating the laws of the physical realm, his prowess permeates the battlefield. This is Lavos, the transmuter, the elemental craftsman.

Lavos harnesses the secret of invention, Tenno. Experimentation is the beauty of science.
—Lotus

Concoct volatile brews of recombinant elements to dissolve, evaporate, and transmute hostile forces. Equalize the System through alchemical warfare as the eccentric scientist, Lavos, to dose his foes with serpentine venom and alter the state of combat conditions through his unorthodox experiments. Lavos's transmutation began in Update 29.6 (2020-12-18): Orphix Venom.

It was first available from Operation: Orphix Venom.

Lavos. The transmuter. Called by some, anachronistically, the alchemist.

Transmutation, you say? A superstitious process from long ago, in which deranged old men heated stinking substances over fires of dung, thinking they could make gold?

No. To the Orokin, it was a darkly potent, forbidden science. They were not squeamish nor moral, so what profound taboos must this art have violated?

No transmuter was more dreaded than Javi. The Crawling Serpent. The Abhorred. The Filth-Speaker.

The Orokin feared him so greatly that they whispered he might, somehow, survive even the Jade Light, just as a severed snake was once believed to grow a new head. So instead he was imprisoned, that his evil might be contained, if not quenched.

His jailer was a brute of a Warframe named Lavos.
—Drusus

Lavos served as a warden to the prison of Dabaoth-Kra on Venus containing an Archimedean named Javi, whose alchemy was feared by the Orokin as they believed it would allow the lower caste to rise up against them. During his imprisonment, Javi would draw seemingly demonic symbols and snakes in his cell, and was reportedly whispering to Lavos during his beatings.

Fearing that Javi would somehow survive the Jade Light, his sentence was overturned to cellular reversal to reduce him to biological pulp. After Lavos received the ceremonial garb to carry out the execution, he no longer beat the prisoners. Lavos realized that Javi's writings were not of demonic origin but of evolution and healing.

When the day of execution came, as Lavos raised his

Cedo shotgun, Javi whispered. In response, Lavos lowered his weapon and bowed before activating his power, liquidizing Javi's flesh. The Orokin jailers cheered before realizing in horror that Lavos was not executing the alchemist, but transmuting the remains; Javi would be reborn as a serpent on Lavos's arm, while a second serpent emerged from Lavos's own flesh as a symbol of change. The new student of alchemy proceeded to massacre the Orokin jailers with a

Not one survived the fall of Dabaoth-Kra save for a floor-washer named Bekran Zaft, who lived to tell the tale.

They say that Lavos often takes counsel from his serpents. One is his brutal advisor, the other his wise teacher. Both have their wisdom, and Javi still whispers to his beloved student.

Much like the snake, Lavos is easy to misjudge. The serpents that poison can also cure. He may have been a monster in his previous life, but he was able to achieve something that eluded the most powerful of the Orokin. He changed.

Moreover, he changed himself. Javi may have helped and instructed, but the will to change must have begun with Lavos.

Perhaps we all have that golden gleam coiled within us somewhere, ready to slither forth from its old skin. We must only beware that we do not condemn as devilish that which we do not yet understand.
—Drusus

Purifying himself from all ailments,

Lavos has no energy capacity and his abilities do not use any resource to activate. Instead, each of his abilities are free to cast with a cooldown in between uses. The Ability Efficiency stat will instead affect the cooldown reduction effect from

The Ability Duration stat will also affect the Status Duration stat uniquely innate to Lavos, which extends or shortens the duration of all status effects created by Lavos using his weapons and abilities.

Lavos also possesses a Rank Up Bonus on his Armor stat, yielding +50% at Warframe Rank 30.

Experiment and unleash volatile mixtures of the deadly elements. Hold down one of the four ability buttons (default 1 ,2 ,3 ,4 ) to imbue a Primary Elemental damage type (

Heat respectively) into the mixing vial displayed above Lavos' ability icons. Imbuement has no cost nor cooldown between uses. 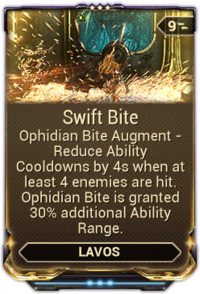 Swift Bite is a Warframe Augment Mod for

Ophidian Bite that increases its Ability Range while granting an ability cooldown reduction for all of his abilities if at least four enemies are hit.

Lavos can be equipped with the following items: 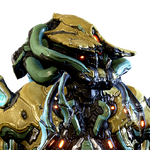 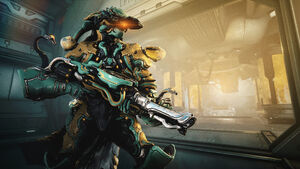 Operation: Orphix Venom with Lavos and his signature primary, Cedo. 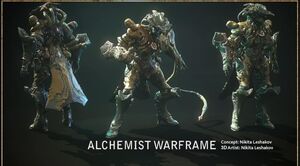 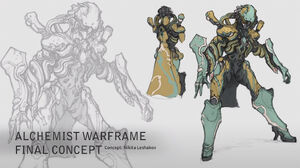 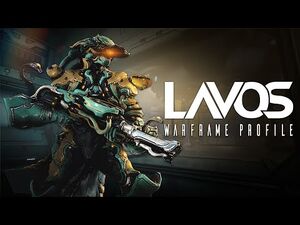 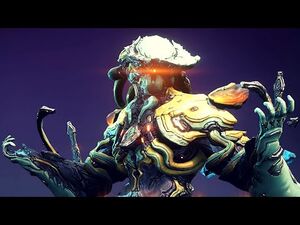