Latchers are small autonomous grenades deployed by Grineer Seekers that will chase a player in an attempt to latch onto them and then detonate. Latchers can be destroyed before they reach their target, but their small size and speed make them very difficult to shoot. If one is attempting to shoot a Latcher preemptively, the ideal situation would be to stand on a platform tall enough to avoid their jump height, as they occasionally stop moving when they cannot reach their target. If the Latcher latches onto you, you can remove them by rolling (default Shift ).

Can be used as infinite energy sources with Trinity's

Energy Vampire, as the ability does not deal any damage to them. The effect will stop if they latch onto a player, however. 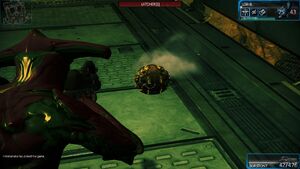 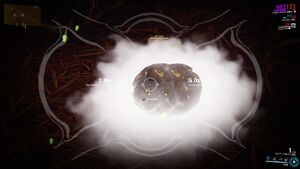