Landscapes (also known by their mission type of Free Roam) are open-world mission environments that take place in vast, expansive maps several square kilometers in area, on which players can freely roam and explore. Unlike the traditional Tilesets, Landscapes do not use procedurally-generated segments, but instead use large, seamlessly fixed environments, on which players can encounter random enemy spawns, mission objectives, hidden quests, and other objects of interest. Each Landscape will have a central town that acts as a player hub, which can support up to 50 players on a shared server, and players can exit the town in the traditional 1 - 4 man squads to explore the vast area outside.

The first of the Landscapes introduced in Update 22.0 (2017-10-12), the Plains of Eidolon is set on Earth, at the site of an ancient battle between the Orokin and the Sentients, who were defeated during their attempted assault on the Orokin Tower in the area. The site of the Orokin Tower, now known as Cetus, has since become home to a community known as the Ostrons, who harvest the tower's parts for a living. The Ostrons are constantly on guard against the Grineer who roam the fields to study and excavate the Sentient remains dotting the landscape, as well as more sinister threats that emerge at night.

The second Landscape to be introduced, a large, mountainous valley region located on Venus. Based around the still active remains of an Orokin terraforming tower, which produces a perpetual snowstorm to create the titular 'orb' in the midst of the blazing surface of Venus for harsh but livable conditions. The main hub is called Fortuna, a subterranean Corpus debt-internment shanty town and home to the Solaris.

The third Landscape to be introduced, the Cambion Drift, is set on the infested moon of Deimos. Beyond the gates of the main hub of the Necralisk, home of the Entrati Family, the Infested have taken control of the landscape, as all the inhabitants are Infested Grey Strain units.

Landscapes have several mechanics unique to them due to their expansive nature:

Players will be able to call down Archwings at any time with an equippable Archwing Launcher gear, which they can use to travel and fight while in mid-air. While in an Archwing, players will have the Shields, Health and Abilities of the Archwing instead of their Warframe, however they will only use standard primary and secondary weapons while in Archwing, instead of Arch-guns and Arch-melee. Gravity will pull players down if they exceed the maximum altitude of the landscape. Companions will also be disabled while in the Archwing.

Players can exit their Archwings by performing melee attacks (default E ) or returning to landscapes' gates. Players can also get knocked out of Archwing when damaged by seeking anti-air missiles, which certain units from both the Grineer and Corpus deploy.

The Tranq Rifle is also useable while in an Archwing, which could make hunting animals easier in some situations. Fishing spears are not useable.

Players may also use K-Drives at any time with an equippable K-Drive Launcher gear, which acts as a highly mobile hoverboard. They initially will not be holding any weapons while on the board, but the hoverboard itself is moddable for damage and the Weapon Switch key (default F ) will let them draw their Secondary Weapon if one is equipped.

Players may dismount from their hoverboard by pressing melee hotkey (default E ) or the 'interact' key (default X ). Players may get knocked off their board by crashing into an obstacle or failing to land a trick properly, in which case their body will ragdoll about keeping the momentum from their board.

Players can create customized Necramechs with the Necraloid faction that can be summoned in any landscape. 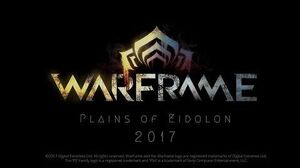 You can now fast travel in Open Landscapes (Plains of Eidolon, Orb Vallis, and Cambion Drift) using Blinkpads! Blinkpads can also be interacted with while in Archwing, but upon arrival you will be returned to foot so that you can choose your next mode of transportation.

Players can teleport to other Blinkpads by interacting with ones they come across within the Landscape, or by selecting the Blinkpad they wish to travel to from their Advanced Map (accessed by holding their bound Show Level Map key).