Warframe operative insertion craft come in many designs, but they are all commonly classified as short-range stealth aircraft. Fuselage insertion stingers will torpedo the Warframe into the hull of the target undetected, and the landing craft will re-position at the extraction point. Between engagements, the landing craft is latched to its sister component, an Orbiter.

The Orbiter carries a smaller vessel called a Landing Craft, which are the actual ships that deliver the Tenno into the combat zone. Rugged and dependable, Landing Craft are capable of travel in a variety of environments, including deep space, planetary atmospheres, and even through the ocean depths. 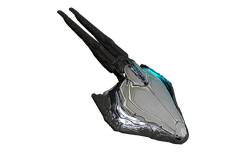 The Mantis is a Landing Craft, which can serve as an alternative transportation choice to the Liset. If the Mantis is the selected Landing Craft, using an Air Support Charge will have Ordis deploy a Med Tower resembling a Life Support Capsule that heals for 100 Health upon each activation, with each Med Tower providing up to 20 healing charges that can be activated by any player. The Mantis landed in Update 17.5.

The Scimitar is a blade-like Landing Craft released in Update 18.0, that provides the Carpet Bomb Air Support ability.

Retrieved from "https://warframe.fandom.com/wiki/Landing_Craft?oldid=1996800"
Community content is available under CC-BY-SA unless otherwise noted.