Any near Kuva Fortress

000000175
JavaScript not loaded. Please refresh your browser using Ctrl+F5 on PC or Shift+R on Mac.

Kuva Siphons are Grineer harvesting machines that can be found in modified non-endless missions on up to two Planets near to which the Kuva Fortress moves in the Star Chart. They can be destroyed to obtain Kuva.

On their own, the Siphons are harmless and cannot be directly damaged by the player's weapons or abilities. Their only function is to gather and store Kuva from the environment by somehow using the energies of Tenno in their vicinity. However they are always accompanied by Kuva Corps reinforcements to defend them, which include Kuva Guardians and Kuva Jesters.

Kuva Siphon missions become accessible only after completing The War Within quest. Should they take place on nodes occupied by the Corpus or Infested, players can expect to see combat between the resident faction and the Grineer intruders, serving to distract both.

Kuva siphoning sites can be found in nodes marked with a Kuva icon on the Star Chart. These nodes will only appear on the two planets that are nearest the Kuva Fortress as it moves around the system. Kuva Siphons cannot spawn in the Void.

Up to six Kuva Siphon missions in total can appear on up to two planets, and they rotate by cooldown with completion of each one. Five of these missions will have enemy levels in the 25-35 range granting up to 700 Kuva per successful harvest. The remaining 6th mission will be created as a Kuva Flood mission, which will reward double the amounts of Kuva, but in turn will spawn level 80-100 enemies.

Kuva can be obtained from Kuva Siphons through the following process:

Once all the Braids are destroyed, the Kuva Siphon will explode and award every member of the Squad around 550-700 Kuva, or around 1,100-1,400 on Kuva Floods. Players will receive the same amount of Kuva regardless of how many clouds the Siphon manages to capture while it was active.

However, if the Siphon manages to absorb 8 clouds of Kuva before it is destroyed (indicated by the row of diamonds under the minimap, which will turn red when the Siphon absorbs a Kuva cloud), it will teleport away, and every member of the Squad will be awarded only up to 350 Kuva depending on the number of braids destroyed. If no braids were destroyed at all there will be no reward. Any remaining Guardians will disappear along with the Siphon whether it is destroyed or successfully escapes, but Jesters and any other Kuva Grineer will stay in mission.

The Kuva Siphon is considered a secondary objective, and failing it will have no effect on the mission's primary objective. 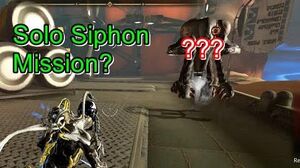 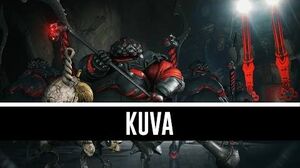 Kuva & All You Need To Know (Warframe)