CODEX
A highly-optimized Nukor that allows for the weapon’s microwave field to hit up to two additional targets.

The Kuva Nukor is the Kuva variant of the

Nukor, with improvements to its already high critical multiplier and status chance, and increased critical chance, magazine, and range, but with marginally lower damage. Its beam has also gained the ability to chain between multiple enemies.

Kuva Nukor is obtained by vanquishing a Kuva Lich who generated with one equipped. After the Lich is vanquished it will be in the player's Foundry ready to claim. 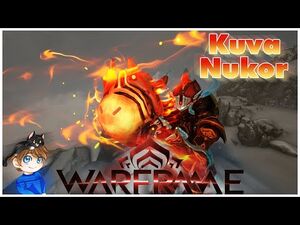 We are indeed touching 1 non-Melee item in the series of Nerfs, and likely to no one’s surprise it’s the Kuva Nukor. It’s a dominant Secondary with incredible power, which is warranted given its acquisition. It’ll keep all of its signature behaviour, but the general output is being notched down slightly with the following change: