For the resource, see Kuva (Resource).
For the weapon variant, see Kuva (Variant).

We Maggots live… not long. We hope more life… work… kill… maybe Queens notice… Maybe… they share… the Old Blood. We are maggots. But eventually even maggots can fly.

The Kuva Lich are Grineer super soldiers that have been spiked with their Queens' Kuva, rendering them all but mortal.

Serving as an individual player's personal enemy, the Kuva Liches will hunt down Tenno and invade the Star Chart using their influence to steal loot and increase enemy levels in controlled territories. A given Kuva Lich has a unique name and randomly assigned elemental resistances and equipment. They are difficult to kill, with the Tenno who created the Kuva Lich being the only one who can defeat said Kuva Lich for good. In order to do so, players will need to modify their Parazon accordingly with the correct sequence of Requiem Mods to purify their Kuva and permanently sever their Continuity.

After the completion of The War Within quest, the player may encounter a Kuva Larvling in a regular level 20+ Grineer mission - this does not include Sorties, Void Fissures, Invasion, Quests or Dark Sectors. The potential for the spawning of a Kuva Larvling in a mission is announced to the player by the level's lighting flickering yellow. When the flickering occurs the player has a hidden time limit to kill enough enemies to force a larvling to be created, similar to the way the Juggernaut spawning works. When enough enemies have been killed, Kuva Larvling will spawn along with a transmission from a Kuva Guardian announcing their presence. Its location will be marked by a red waypoint which is slightly different from the red marker for nearby enemies.

By choosing to kill the Kuva Larvling with a Mercy kill, the player causes a Kuva Lich to arise in the Origin System, thus becoming the Progenitor of that Kuva Lich, and the Warframe used for this is recognized as the Progenitor Warframe​. In a squad, only the last player that damaged the larvling may take the Mercy kill. If no one takes the mercy action, the larvling will despawn after 30 seconds. This does not interrupt the normal course of the mission. Upon return to the Orbiter, regardless of whether the mission was completed or aborted, the player will receive communications from the newly created Kuva Lich.

Once the Larvling has been downed, the entire squad will receive 100

Kuva on end of mission, even if not mercied. When the player is within mercy distance, the downed Larvling will also display an icon and name of the Kuva Weapon the created Kuva Lich will possess. The displayed weapon is always random, meaning players can attempt the Larvling multiple times before Mercy killing one with their weapon of choice.

A Kuva Lich increasingly establishes Influence across a set of nodes in the system by commanding Kuva Thralls, which will appear during missions. The Kuva Lich will gain Influence each time it ranks up, and a node will lose its influence after the player defeats the Kuva Lich Controlled Territory mission there. Clearing Influence from every node on the Star Chart will cause the Kuva Lich to rank up. Influence serves to diminish the player's rewards for completing missions in the affected nodes as a part of the reward will be claimed by the Kuva Lich through a Reward Tax (this includes Credits, Resources, Blueprints, Void Relics, Ayatan Treasures, Kuva, and Mods, but not Requiem Relics, Requiem Mods, and Pigments). As the number of nodes under Influence increases, the Reward Tax will also increase (roughly 0.7% per node). Everything the player loses through Reward Tax will only be reclaimed after they have defeated the Kuva Lich.

Every Kuva Lich starts at Level 1, indicated above their name in their stats screen. As the player progressively fills the Kuva Lich's rage meter they will eventually meet the Kuva Lich in combat during a mission. If the player fails a Mercy attack at any point during the fight, the Kuva Lich will be staggered, swearing vengeance towards the player. After doing so, the Kuva Lich will despawn, though not before increasing in level by one. As a Kuva Lich increases in level so too does the level of missions under their influence. A Kuva Lich can reach a maximum level of 5. Kuva Liches may gain additional resistances and immunities upon leveling up.

Kuva Liches have four unique abilities, three of them are variants of existing Warframe abilities and one is a movement ability. The first three abilities that they possess depend on the element associated with the Progenitor Warframe that killed them. Regardless of the Progenitor Warframe, the fourth ability can be one of the following four abilities: Lurch, Stampede, Teleport, or Vault. Thralls will inherit their Kuva Lich's movement ability.

In addition to the above abilities, Kuva Liches can perform grapple attacks against Tenno, dealing heavy damage to them. The player will be thrown and stuck in a ragdoll animation after these attacks. During the animation other players can damage the Kuva Lich, albeit dealing reduced damage.

A Kuva Lich does not maintain their territory on their own. Aside from enlisting the aid of Grineer soldiers, a select few of these soldiers are turned into Kuva Thralls, who are behaviorally identical to standard Grineer troops but have various bonuses. Aside from inheriting Kuva Lich's movement Ability, they receive 25% less damage compared to their standard counterparts. Additionally, should a Kuva Lich spawn in a mission, they will convert a nearby Grineer every 20 seconds into a Thrall as well. These Thralls are otherwise identical to "normal" Thralls, though their weapon colors are changed to match the general color scheme of their Kuva Lich.

Thralls are identified by a blue outline that surrounds them, similar to the one found on Synthesis Targets. Their label is changed to "(Kuva Lich Name) Thrall", and their presence is noted by a both a unique Mission Waypoint and a musical sting that plays when they spawn. Ironically enough, the Thralls themselves provide the means to defeat their Kuva Lich once and for all.

Generally, most Grineer units can be converted to Thralls with the exceptions of Latchers, Hyekkas, Drahk, Rollers, Noxes, and Guardsmen. Kuva Liches may attempt to convert the latter three units, but despite appearances, they will not turn into Thralls. Up to a maximum of 10 Thralls can spawn in a mission naturally, and a Kuva Lich is also limited to enthralling 10 enemies, thus up to 20 Thralls can be encountered in a given Kuva Lich-controlled node should the Kuva Lich spawn in the mission.  However, enthralled enemies count towards the mission's natural Thrall limit, so the maximum of 20 can only be reached if all 10 Thralls have already spawned in the mission before the Kuva Lich enthralls any enemies.

Naturally converted Thralls usually appear in large groups of Grineer, but they always appear out of line-of-sight from the player (As close as 40 meters has been confirmed). There's a cooldown on how often a natural conversation can take place. Minimum time seems to be 20 secs from spawn to spawn (Same as Kuva Lich enthrallment).

A minimum of 1 Thrall will spawn in any Kuva Lich mission. This first Thrall will spawn right as the mission starts. Spawning more Thralls in a mission requires two things: Movement and killing Grineer. Movement gets you into range of more Grineer, which can then be naturally converted out of line-of-sight. Killing Grineer can also trigger a natural conversion, and seems to be the only way to get more than 2 or 3 Thralls per mission.

Fast missions (Spy, Capture, Rescue, and Sabotage) seem to only spawn a small number of Thralls, due to the lack of a high number of Grineer in those missions. Endless missions (Defense, Disruption, Interception, Excavation, and Survival) take a bit longer to complete, but only need to be done once, to kill all 10 Thralls, in contrast to the 3-4 times for the fast missions. Exterminate and Mobile Defense seems to be a medium, between the two other types of missions.

A contested territory will only be cleared as soon as all 10 Thralls in that node has been killed. So if only 5 Thralls spawn in a mission, you can just do that mission again and again, until you've killed all 10 of them. However, if 9 out of the 10 Thralls in that node has been killed, only 1 Thrall will spawn next time you do that mission node, since the maximum of 10 naturally spawned Thralls per node cannot be exceeded. Killing or alerting Grineer seems to be required in order to increase the natural spawning beyond the first 2 or 3.

Kuva Liches may rarely spawn with a quirk that provides unique voice-lines and behavior when encountered.

Kuva Liches can be converted instead of being vanquished after the player discovers all three Requiem Mods needed to bring it down. Converted Kuva Liches will keep the weapon they have equipped and will occasionally spawn alongside the player during missions. A greatly increased chance to spawn is triggered if the player spends a Revive. They will fire their weapons and use their abilities similar to Warframe Specters. Unlike Specters, they will attempt to use all their abilities[citation needed]. The level of the Lich when it is converted does not affect its level when it spawns in to help players.

Requiem Mods are a special subset of Parazon Mods, each one an enigmatic phrase fragment of a complete Requiem Sequence, thus the only way to permanently sever a Kuva Lich's Continuity.

They do not possess any polarity, drain, or rank, but they do hold up to 3 charges per mod. Each time a mod is successfully used in a Requiem sequence to lethally defeat a Kuva Lich (in other words, a successful vanquish or convert), the mods will be drained of one of their charges, becoming powerless once all 3 are used up, making them a unique type of mod in that they need to be restocked like resources.

4 Requiem Mods can be Transmuted into a new, random, fully charged, Requiem Mod. When all charges are used, the Mod becomes Defiled and can be broken down into Endo, sold for Credits, or transmuted.

These are tradable between players with a trade tax of 2,500 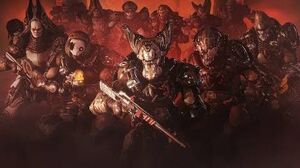 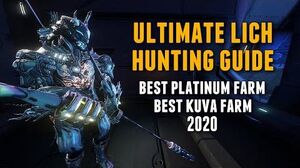 Retrieved from "https://warframe.fandom.com/wiki/Kuva_Lich/Main?oldid=2076399"
Community content is available under CC-BY-SA unless otherwise noted.