For the Corpus counterpart, see Candidate.

A Kuva Larvling is a unique Grineer enemy that can spawn on any regular level 20+ Grineer mission. They can be mercied at low health to spawn a Kuva Lich.

Kuva Larvlings will only spawn after you have completed the The War Within Quest.

After the screen flashes in any level 20+ Grineer mission, players are required to kill at least 10 enemies in under 1 minute for the Kuva Larvling to spawn. 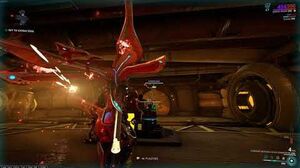 As the pool of Adversary weapons grows and your checklist fills out, the natural chance of finding a Progenitor (Larvling or Candidate) with the exact weapon you desire shrinks. This Adversary Weapon Generation Quality of Life change is meant to reduce randomness over time of what weapon a Progenitor Candidate (Sister) or Larvling (Kuva Lich) can spawn with.

By skipping a Progenitor (choosing not to Mercy them) the spawned weapon is then put into a ‘reject’ pile for that round of Adversary generation, meaning that it will not appear again and ultimately reducing the weapon pool each time you ‘reject’.

The list of rejected weapons is cleared once you accept an Adversary and the process would start again from a clean slate for both Sister or Kuva Lich the next time you go looking for an Adversary. This list clearing applies to both Sister and Kuva Lich, meaning once the chosen Adversary is Converted or Vanquished, the list clears for both factions.

The Kuva Larvling Who Lived

Starting from the very beginning of Kuva Lich conception brings us to Kuva Larvlings. Kuva Larvlings will now play a key role in determining your future relationship with your Kuva Lich.

As an added benefit to completing the mission even if you choose NOT to kill the Kuva Larvling, a downed Kuva Larvling will grant 100 Kuva on End of Mission.