Wearing heavy armor and adorned in red cloth, the fearsome Kuva Guardians are among the fighting elite in the Queens' army. These imposing female warriors' size belie their uncanny, lightning-like agility, which they will employ to surround their enemies and bring even the Tenno to their knees with just a few well-placed blows. They are followed around by mischievous Jester-like creatures that are quick to attack and are quite deadly.[1]

At least one pair of Kuva Guardians and Jesters will spawn in to protect Kuva Siphons.

Kesheg makes them immune to any conventional type of damage or crowd control as long as they are holding it. To be able to damage them, the player must utilize their Void powers to disarm them:

This will force the Kesheg out of the Guardian's hands, consequently making them vulnerable to all sources of damage. However they will pull out their devastating

Twin Rogga pistols to keep up the attack. If given enough time they will pick their Kesheg back up and become invulnerable again.

As an overall change, Kuva Guardians are now easier to turn vulnerable but will become tougher to kill once they are. 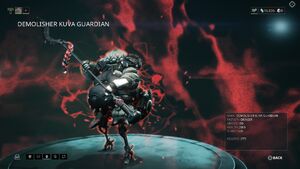 Kuva Demolisher Guardian, as seen on The Codex 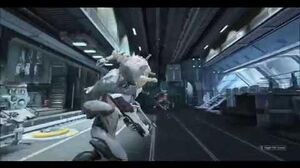