The Kuva Grattler is the Kuva variant of the

Grattler archgun, with higher critical chance, critical multiplier, and status chance, doubled magazine size, and doubled ammo regeneration in Archwing or Necramech combat, but sacrifices damage and some atmospheric reload speed. It no longer requires spool-up to achieve maximum fire rate, but in turn its base fire rate is slightly lower than a fully spooled normal Grattler.

Kuva Grattler is obtained by vanquishing a Kuva Lich who generated with one equipped. After the Lich is vanquished it will be in the player's Foundry ready to claim. 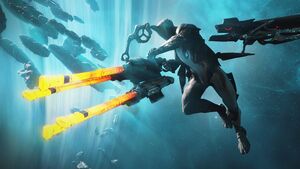