Kubrows are terrain-restricted melee canine companions. Kubrows behave similarly to NPC allies (i.e. specters) as they will stay within close proximity of the player while fighting alongside them and will enter bleedout states when they are downed, from which they can be revived. Incubated Kubrows have variable permanent traits such as species, height, and eye color, as well as customizable features like fur color and fur pattern. There are currently 6 species of ownable Kubrows, each with different stats and abilities. 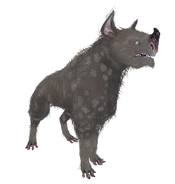 The Kubrow are a canine-like egg-laying species that originally served as companions and pets for the Orokin, and later as attack and guard animals for the Orokin elite.

After the downfall of the Orokin, surviving Kubrow on Earth became feral with only the most aggressive and ferocious surviving. Recent DNA-altering technologies have been unearthed that can allow them to once again be domesticated, to become loyal and protective companions to their new owner. This process however leaves the domesticated animals riddled with degenerative defects that are constantly repaired, however, they are intelligent and highly social, when domesticated. For the Tenno, a Kubrow can be a powerful and loyal ally; however, they are limited to melee attacks.

CODEX
Prized for its ability to sneak up on unsuspecting prey, the Huras Kubrow were first used as hunting companions by the Orokin elite. Orokin Era Tenno soon adapted the strain for use in covert missions and assassinations.

Stalk
Allows the Huras Kubrow to cloak itself and its master.
Main article: Raksa Kubrow (edit)

CODEX
Designed by the Orokin to be the perfect companion, a Kubrow was never far from its master's side. Loyal and obedient, these creatures made ideal bodyguards. Equipped with shield generators for added protection, their fierce growl could paralyze any attacker with fear.

Howl
Allows the Raksa Kubrow to growl, frightening nearby opponents.

Protect
Allows the Raksa Kubrow to replenish its master's shields when they are depleted.
Main article: Sahasa Kubrow (edit)

CODEX
Enterprising Orokin genetic designers recognized that the Kubrow's affinity for games of fetch could be used for more serious endeavors. They soon developed a strain adept at reconnaissance and contraband recovery. Tenno often used the creatures to help resupply while in the field.

Dig
Allows the Sahasa Kubrow to sniff out and dig up buried items.

CODEX
Once the value of Orokin guard-pets had been realized, it was not long after the Orokin guard began experimenting with strains designed for combat. These were no longer household pets but superior war animals bred for ferocity and aggression.

Savagery
Allows the Sunika Kubrow to use Finisher attacks on enemies.

Retrieve
The kubrow has a chance to scavenge additional loot from fallen enemies or containers.
Main article: Helminth Charger (edit)

CODEX
A skittish creature, the Vizier Predasite will unleash a spume of acid before scurrying away.

Acidic Spittle
The Predasite spits corrosive projectiles at nearby targets.

CODEX
Easily frightened, this Predasite flees in the sight of danger, but not before hissing a geyser of parasitic sputum.

Endoparasitic Vector
The Predasite spits a viral parasite at a target.

CODEX
Not quite as flighty as its subspecies cousins, it will charge if it feels threatened.

Infectious Bite
The Predasite bites a target, wounding them with a volatile virus.

Paralytic Spores
The Predasite performs a tackle, dealing damage in its wake and stunning nearby enemies.

Once the player is able to meet the necessary requirements to begin incubation, the player is offered a choice between a random incubation or the use of Genetic Code Templates.

As the name implies, a Random incubation offers no guarantees on the resulting Kubrow's Variant, height, gender, color, or fur pattern.

An incubation utilizing Genetic Code Templates offers a much higher probability of the traits imprinted on the Template to be present in the resulting Kubrow, however, this is still not guaranteed, and certain Kubrow traits are not even imprinted on the Template in the first place. See the Genetic Code Template article for more information about the transferal of traits from one Kubrow to another when starting this type of incubation.

Additionally, when a player has a fully matured Helminth Cyst, there will be an option to drain cyst which will guarantee a Helminth Charger. The drained cyst will eventually regrow.

Regardless of the type of incubation, once the process is started, it will require 48 hours (24 hours with an Incubator Upgrade Segment) to complete. This stage may, however, be rushed for 15 Platinum

When the incubation process completes, either naturally or by rushing, the player will be able to name their new Kubrow for free. Subsequent renaming is possible for 15 Platinum

Players can regress the age of their Kubrows back to their infant forms through the incubator. In their baby forms, they cannot be brought into missions to be used for combat or utility. Installed mods, Formas, and Orokin Reactors will still be intact if the player chooses to mature their Kubrows again.

Predasites are modular Kubrow-like companions created through a process called Revivification with Son, using Mutagens and Antigens purchased from him along with finding wild Predasite in Cambion Drift, Deimos via Conservation that have been weakened by hostile Infested.

Currently, most Kubrow Mods are dropped by Feral Kubrow or granted once a Kubrow begins incubation. A few mods are:

501 of the first cloned Kubrow have been lost, but never forgotten. 20/07/2014. All owners of these fallen Kubrow have received: