Kuakas are rodent-like creatures introduced in the Plains of Eidolon update.

There also are Ashen Kuakas, which have twice the amount of health.

Kuakas can be seen in some parts of the Grineer Forest tileset  Unlike when they appear on the Plains of Eidolon, they are purely decorative in these locations and cannot be killed or scanned.

After the latest Update, you now can capture kuakas to gain ostron standing in cetus. they will spawn directly infront of Cetus (When you spawn, there will be some infront of you behind the sea). 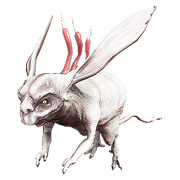 Ashen Kuakas are rodent-like creatures introduced in the Plains of Eidolon update.

Retrieved from "https://warframe.fandom.com/wiki/Kuaka?oldid=2093269"
Community content is available under CC-BY-SA unless otherwise noted.