WARFRAME Wiki
Register
Don't have an account?
Sign In
Advertisement
in: Enemies, Enemies With No Drops, Corpus,
and 3 more
English

Being a part of the Corpus can be rough, but that does not mean they are without hope. For among them lives a legend. A man who fears nothing. An unyielding hero against those who would stand in the way of Profit.

John Prodman is a rarely-encountered enemy in The Index[1]. Similar to Clem, Prodman has his roots as an Internet meme within the WARFRAME community.

According to the description of his autograph, he is an employee of Anyo Corp, and was recently awarded "Employee of the Month". 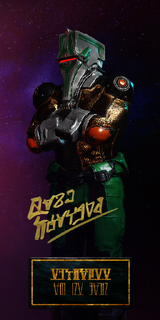 On March 1, 2014, a user by the name of Llyssa posted a thread entitled "The Most Badass Ever In Warframe"[2], where during an Infested Invasion, Llyssa documented a Prod Crewman taking on Phorid and despite all odds, surviving the encounter. Other players noted the Crewman's bravery and subsequently exaggerated his accomplishments, and ultimately christened the lone Crewman John Prodman.

Over time Digital Extremes grew aware of John's existence, and has since canonized the crewman in a blog post on the official site [3]. In the post, the developers talk about John's exploits, such as being the first crewman to replace Zanuka as the Corpus' Employee of the Month, and turning down a

Detron in exchange for his trusty

Prova (and if need be, his fists). Digital Extremes has also stated that John is the Prod Crewman present in promotional videos involving the Corpus, typically those with a humorous slant.

John Prodman can only be found as an enemy unit in The Index, regardless of what group of Brokers the players are currently facing or the investment risk tier the players chose beforehand. He will always appear via a column of light after one hour, but only shows up once per match with further hours not triggering more appearances. As his reputation might suggest, he wields a powerful Prova against the Tenno, and unlike many enemies also uses it for blocking. He is also able to teleport around the arena and perform an attack similar to

Rhino Charge. When defeated, he will shrug nonchalantly and teleport away via the same column of light, and drop an autographed poster[4].

John Prodman only appears as a fighter in The Index after one hour has passed at any risk level. Since enemy level scales indefinitely as the match goes on, by the time he appears the Brokers can be as high as Level 250. Thus, preparation and squad coordination are required to ensure an encounter.

A combination of high-damage-dealing and damage-mitigating Warframes stands the best chance to survive the hour and remain effective. A high-power-strength

Elemental Ward, especially if paired with a powerful weapon such as a status-build

Banshee can make enemies highly vulnerable to damage via

Nova can further cripple enemies' movement and attack speed with

Frost can be used to place a

Snow Globe around the Tenno team's gate in order to slow any enemy Brokers attempting to bank Index points.

In terms of enemy behavior, all Brokers will have infinitely scaling damage and damage-resistance, including Armor and Shields. Among the most dangerous Brokers is Jad Teran, who, despite his Codex picture showing him wearing a Sap-variant Scrambus helmet, can actually switch between all 4 helmets, including the Nul-variant, which cancels out defensive powers like

Elemental Ward. This can make him dangerous for squads relying heavily on defensive buffs. Tia Mayn is another very dangerous Broker at higher levels, as she can pair

Invisibility with a devastating Spin Attack of her

Ohma to destroy even the most resilient Warframe in a single hit. (As per the Scrambus and Comba rework, Jad Teran cannot activate his helmet's ability).

Once John Prodman has been defeated and has dropped his autograph, the squad must still win the match in order to claim their prize. As each Index point banked by the enemy Brokers reduces the mission timer by 10 seconds, it can be tempting for a squad to simply stop fighting and allow the enemy to bank points until the timer reaches zero. Be advised that the Index appears to have a special fail-condition built in that triggers a separate countdown once enough time has passed without the Tenno killing any Brokers or banking any points. Once this secondary timer expires, the match will be considered a failure, regardless of the score, and no rewards will be gained, thus losing the autograph.