When intrepid explorers returned from the Void they would isolate themselves in the vaults until they re-aligned with causality and sanity. Technology useful against the Infestation may still -
You stay out, Tenno, there's only death and decay down there!
—Loid and Otak

Isolation Vaults are Entrati facilities built deep within Deimos, which safeguard the various treasures and information that Entrati explorers have acquired from the Void. With Deimos overrun by the Infested, these vaults now serve as tantalizing places for explorers to try their hand at various riches if they can survive the dangers within.

The Cambion Drift hides numerous Isolation Vaults that are closed off by Infested masses. To access them, players must initiate an "Isolation Vault" Bounty from Mother either from inside the Necralisk or from Mother's various outposts within the Drift.

Tiers must be completed in order to permanently unlock the next tier.

Players must collect Fass Residue or Vome Residue depending on the current Cycle in the Drift. The amount of Residue needed varies by Squad Number: 6 in a 1-2 Player Squad and 12 in a 3-4 Player Squad.

The collected Residue must be brought to a Bait Station, which will mix the Residue into a Concoction to access the caves. The process attracts Infested, and the players must defend the Bait Station for 90 seconds.

Once the Concoction is made, the players can take it down into the caves and "feed" it to an Infested door by throwing it with the Alternate Fire button.

If the Concoction is thrown anywhere other than the Infested door, it will be lost, forcing players to create a new one. They only need to interact with the Bait Station again, and do not need to gather more Residue.

Access to the depths is further blocked by a zone that is highly toxic even to Warframes. A Toxic Gauge will appear from 0/100 and gradually increases by 1 every 0.5 seconds, and marked Infested enemies that appear will drop Pickups that reduce the Toxicity Levels by 10. Players must hold out for 90 seconds while preventing the Gauge from completely filling. The stronger Deimos Carnis Rex and Deimos Saxum will appear during the final minute.

Scintillant may appear in the area outside the Vault as floating lootable objects, which can be picked up similar to Cetus Wisps, except they won't despawn.

After all Necramechs are defeated, an Esophage will appear which will take players back to the surface. Players can interact with the Esophage now to claim their rewards or attempt to open the vault for bonuses.

It is important to note players that have not unlocked Transference from The War Within won't have any means to complete this part of the bounty.

Void damage. This will spawn Loid, who will roam around to activate the door's keys. Players must defend him from continuously spawning Infested; the Necraloid can be healed for 500 health if he is hit with Void Sling or Amp shots.

Once Loid has activated the keys and returned to the door, players must solve the Vault's Requiem Cipher. They are only given a brief moment to memorize the pattern on the door before interacting with the nearby Reactive Crystals via

Void damage, in the order of the symbols from top to bottom. Failing the cipher does not alter its pattern, but three failures will trigger the failsafe and cause the Vault to become permanently inaccessible.

Solving the Requiem Cipher will complete the bonus bounty and provide an additional Reward from the drop table, and players may help themselves to the many Cambion Drift resources inside the vault, including fishing and mining parts, along with Argon Crystals and Ayatan Stars.

Completing the initial Isolation Vault bounty permanently unlocks Arcana Bounties from Mother in the Cambion Drift just outside the vaults. These are multi-stage bounties to clear out the vault zones from Infested, with similar tasks from the field bounties along with new ones.

Higher tiers of Arcana Bounties can be permanently unlocked after completing the lower tiers at least once.

Vaults also contain Storage Containers that, when broken, may drop the following resources:

Scintillants may also appear floating around in the Entrati ruins that contain these vaults.

Void. Some vaults may have hidden locked doors and hatches, while others may have portal generators that need to be activated to access these hidden treasures. These secrets will always have a container with a Deimos Captura scene, and may also house an inactive Necramech wreckage which players can commandeer to fight inside the vault. 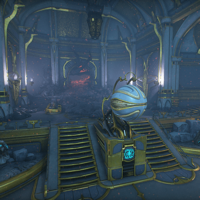 Shooting the reactive crystal above the arch/doorway next to the center of this vault variation (in front of the orb shown in the picture) will reveal breakable statues in the sides of the tile. 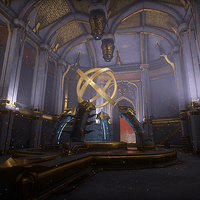 Shooting three Reactive Crystals on each side of the center room will activate circular rings in the center of the vault, aligning them to create a Void portal that players to go in, similar to Halls of Ascension tests on Lua or Void Sabotage missions. There is an inactive Necramech that players can perform Transference onto through the portal. Once through the portal, under the bridge is a Deimos Captura Container. 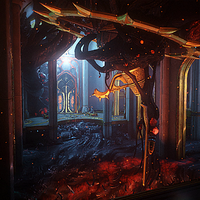 Toxin around its mouth and occasionally spits out throbbing sacs that emit an increasingly high-pitched noise before exploding. These sacs can be picked up and thrown back into the pit via Alternate Fire, spawning Infested growth on the machinery above the pit. Shooting these will cause some of the machinery to fall into the pit, after which several

Toxin globs will be ejected around the pit. Repeating the process two more times will drop all the machinery and kill the pit monster.

In the mouth of the dead pit monster contains a Deimos Jugulus Rex, an inactive Necramech, and a Deimos Captura Container. A Reactive Crystal opens a portal back to the room above. 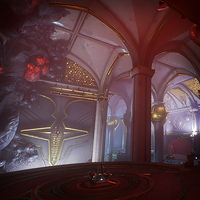 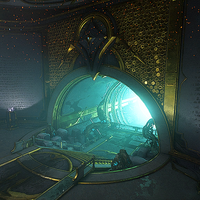 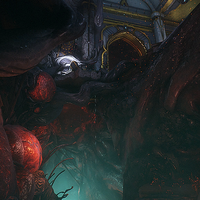 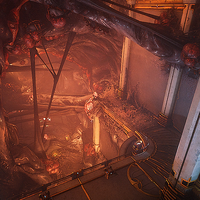 The closed door on the top floor can be opened by hitting a hidden reactive crystal located behind a bright light on top of a closed door on one of the balconies. It seems like you shouldn't be able to hit the reactive cristal without opening the door first, but it's possible, and there's no known way to open that door as of thsi writing. Inside the chamber that opens there is an array of containers and a Captura Container in the corner. The reactive crystal inside the chamber reveals a statue that can be broken for a few more resources. 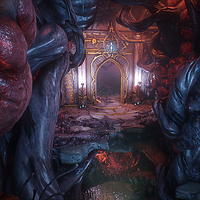 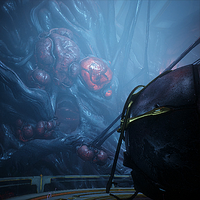 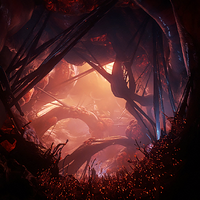 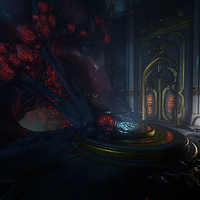 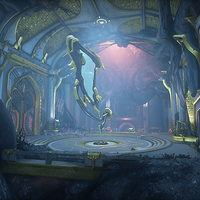 Shooting the two Reactive Crystals hidden behind the doors on opposite ends of the room will open up the locked door in the middle of the room. Inside the room contains a number of resource canisters, a Deimos Captura Container, and another Reactive Crystal in the center of the secret room that can be shot to reveal breakable statues.

Read the official Dev Workshop here for full explanation and details on the following changes: https://forums.warframe.com/topic/1240567-isolation-arcana-bounty-flow-changes/

We have 4 main pillars of Isolation Vault flow changes. Not only do these changes significantly loosen the required routine, but they also aim to further improve the process for less new player confusion.

Now that the Arcana Bounties will be more easily accessible, it’s time to rebalance the drop tables:

No longer in the tables:

Both of these have been taken out to allow for better odds at getting newer/desired rewards.

Our Warframe PC Droptable site has been updated to reflect the above changes.

The Bonus condition of ‘Collect no more than 3 fluid sacs’ had the most common feedback of being too difficult when trying to reach 25 and 30 marked enemy kills using just 3 Fluid Sacs. We’ve made some changes to ease the general Bounty flow and also provide an improved opportunity to achieve the Bonus condition:

Daughter has tasked you to escort/protect a friendly POLYP-HOG JUGGERNAUT that is searching for Fungal Polyps! But we all know what happens when someone bothers us while we’re eating...

Curious behaviors have been observed of the Infested interacting with the organic fluids in the underground caves. Subvert the fluid extraction device and throw it back at them to collect samples!

There is a mysterious mist wafting throughout the area, driving the creatures within mad! Negate the effects of the mist with the Emitter Unit and seal the mist fissures before the creature's attempt to open the fissures.

An early change meant for Update Deimos: Arcana that was low risk to add now! Feedback alluded to this phase not offering much variety within the Bounty - so we’ve shortened it to get you to the meat of the Bounty quicker!